Hearing the call
Patrick Guntensperger
Parksville, BC, Canada
As you might be aware, I’m in the throes of writing a book on religion. There are some prior posts, here on the site, which started as early drafts of sections of what will be the book. Those of you who read me regularly have a more or less clear idea that I’m not a big fan of the institution, and that I take religion to be one of the most pernicious influences in the world today, besides being a delusion that adherents ought to have treated like any other psychiatric disorder. Religious people, besides being a demonstrable danger to themselves and, more importantly, others, ought t obe treated with compassion, but it should be recognised that they are disturbed in a very malignant way.
Having said that let me also say that I am now an ordained minister.
My background in philosophy, my study of religion,my research of the bible and other religious texts all conspired to make my ordination relatively simple as far as examinations were concerned.
So now I am entitled to call myself “Minister”,“Pastor”, or “Reverend”, just like Al Sharpton, or Jim Jones, or Jim on “Taxi”. I can perform marriages in BC as soon as I get around to registering myself with the Department of Vital Statistics in Kelowna BC, but my letter of good standing from my church is all I need in the US. I have a cool framed Diploma/Certificate, a bumper sticker that says my car is on official Ministerial business; I even have a placard to hang from the rearview mirror like the handicapped one I got when I had my knee surgery, only it says “On Official Ministerial Business” that lets me park in all kinds of ridiculous places. My ecclesiastical shirts are on order and I am practicing walking with solemn dignity and employing phrases like “Peace be with you, my daughter” and“Go in peace, my son”.
While there is a certain amount of just plain bloody-mindedness associated with my new official status, there is an actual reason I decided to become a man of the cloth. 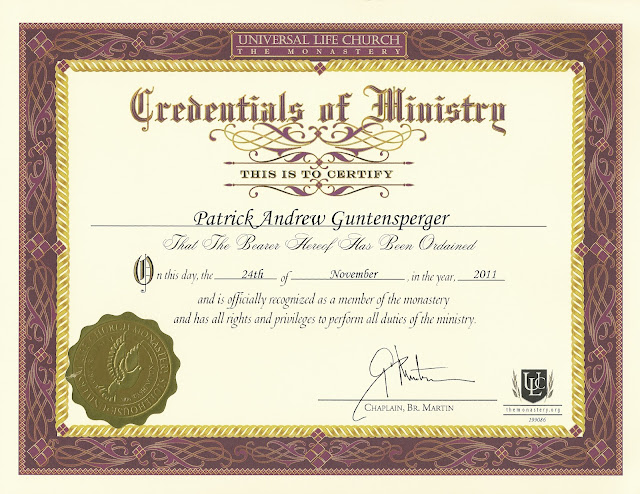 Frankly, it’s cool beyond description.
But why? Why would an avowed atheist, much less an anti-theist, want to join the ranks of the silly, particularly as an officer, in the corps of the deluded?
I was at least partially brought up in the old Quebec, where the Catholic Church wielded influence through local parish priests that included the selection of Members of Parliament and extended to the appointment of judges and even to the choice of names and the number of children a family had. While even as a child, it was pretty evident to me that the all-pervasive sect was delusional and that the tenets ascribed to were ludicrous, I was also intrigued by the authority the priests wielded, the deference they commanded, and the hypocrisy they exuded. The fact is that I actually had some respect for the intelligence of some of those priests. Not for their kindness (they had none I could see), their integrity, their compassion, or their holiness; not at all. But I did recognise that some of them, if not actually intelligent, displayed a sort of native cunning that left me in no doubt whatsoever that their belief in the absurdity they preached was entirely ersatz.
So while I have no intention of pursuing the time-honoured tradition of fleecing the believers, I have every intention of taking full advantage of the little perks to which my belief system in no way whatsoever entitles me. I will park wherever I think my ministerial duties entitle me to (not handicapped zones, of course), I will accept preferential seating, I will use my exalted status to talk my way out of speeding tickets, Iwill settle personal disputes with casual unquestioned moral authority, I will proffer life advice, I will admonish with impunity, and I will marry any couple or triple or more) of any sex who wants me to do so. I will give homilies, I will judge others and find them wanting, I will cultivate, until it is an ingrained habit, an air of self-deprecating moral superiority. I will speak as though I’m an expert on subjects of which I am entirely ignorant and expect intellectual deference asmy due. I am now, after all, among the few chosen by GOD.
In fact, if I didn’t like the waitress I have right now, I would pay my bill in small change, and in lieu of a tip, simply give her a blessing. Use that to feed your children, Sylvie!
…enditem…