On the other side of things is what we call the deterministic view.

Our intuition tells us that when we make a choice, we are the active agent and that although external circumstances might influence us one way or another, the decision is ours. It goes against every instinct we can muster when we try to imagine that our choice in any situation is predetermined.
But wait. What was that about instinct? We do, after all accept some determinism in the world.When we really think about it, most of us are willing to concede that free will isn’t absolute. We know we don’t even have complete control over our own bodies; try to stop sweating in a sauna or producing tears when dicing onions. Okay,these are autonomic responses, they aren’t matters of will; we don’t choose to sweat.
What about breathing? We can choose to hold a breath; surely that’s a matter of free will? Perhaps it is when we give it our attention, but when we don’t, it seems to take control ofitself. Pretty much everyone recognises that some events are determined, or at least, even though we might be the agent, are out of our control.
Courts of law make the presumption that human beings have free will; a person can be punished for the choices he makes. If you stomp a person to death, you are liable for your action; if, on the other hand, you fall out of a window and crush a pedestrian,you aren’t; the first was an exercise of free will, the second wasn’t. But even if you walk up to someone and deliberately shoot him, you aren’t considered liable if you were not exercising fee will. If you had a mental defect that caused an irresistible compulsion to behave in that way, it wasn’t an act of free will and you aren’t liable.
Even with a presumption of free will, we are more and more coming to accept that there are times when we act because there is no way not to act. It might seem to the alcoholic, for example, that having that next drink is a matter of free choice, but whether it is or not is certainly a profoundly contentious issue. We recognise already that free will is far from absolute. Just how big a leap would it be to go all the way and accept the proposition that everything is determined in this mechanistic world?
But the reallyinteresting point is: it doesn’t matter.
Let us suppose you completely accept the proposition that each event, every roll of the dice, each flap of the sparrow’s wing, is predetermined and simply an inevitable consequence of physical laws acting on physical objects in the world. Moreover,since mind is a function of brain, and a brain is a physical object, even our choices, as a function of mind, are subject to those physical laws. That being the case, free will is only an illusion.
We might agonise over whether to hit or stand on seventeen, but whichever way we go, that decisionwas made for us when the universe first got started. When we hit, it feels like we are making the decision, but according to a deterministic view, in fact the decision was inevitable, because we could no more stand on seventeen in this instance than a domino could refuse to fall when its time comes.
But it doesn’t matter.
What are you going to do? Cross a busy street against traffic, because the result is predetermined? Okay, but your decision to do so was predetermined as well, so if you become street pizza, that was predetermined. Even in a purely mechanistic universe,the only way you can tell what is predetermined is by an examination of the events after the fact.
Predetermined or not,our lives must be lived as though we have free will. We are hardwired that wayand there is nothing we can do about it. Even radical determinism places ultimate responsibility squarely upon the shoulders of the agent in every action.
Contrast this with the incoherent and essentially contradictory doctrines inherent in the religious worldview.
It is a necessary componentof the religious worldview that our every act was foreseen and launched by thecreator; that our actions were predetermined when the world was created and that god not only knows what we will do at every moment of our lives, but that we were created to act in that way. Nevertheless, the same world view imposes enormous guilt and unspeakable punishment for actions for which we are not responsible; actions which the creator not only foresaw, but caused when he created us.
Thus, as arguments go, any argument for the existence of god that entails free will has insurmountable problems. In contrast, the accusation that atheism, insofar as it espouses an objective, purely scientific worldview, denies free will is specious at best. 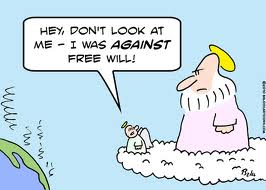