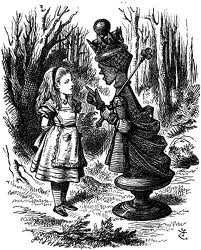 “I can’t believe THAT!” saidAlice

“Can’t you?” said the Queen in a pitying tone.“Try again: draw a long breath, and shut your eyes.”

“I daresay you haven’t had much practice,” saidthe Queen. “When I was your age, I always did it for half-an-hour a day. Whysometimes I believed as many as six impossible things before breakfast!”

I have always been bewildered by the human inclination to accept the most preposterous propositions. And yet not only does society as a whole subscribe to absurd views, but to question such views is considered to be an indication of questionable sanity, and certainly an indication of bad taste and insensitivity.

In Western society it is considered borderline sociopathic to suggest that there is something bizarre about the near universal acceptance of propositions including: That our lives are governed by a supercreature that requires that we get down on our knees and tell him through telepathy every day how wonderful he is. That, this apparently being insufficient, he further desires that we underscore our worship at least weekly by repeating a ritualised cannibalistic ceremony, wherein we symbolically eat the flesh and drink the blood of a dead two thousand year old delusional preacher. The Catholic sub–sect of this death cult maintains that the bread and wine employed for this purpose is not symbolic but is the “substance” – the real, actual, genuine flesh and blood of the long-dead rabbi. Real cannibalism.

And fundamentalists think atheists are nuts.
What is particularly bewildering to any rational being who is able to step back and look at this irrational behaviour with any degree of objectivity, is that these beliefs are not only held, but ferociously defended, without a shred of evidence. Not only isn’t there an iota of empirical support for these patently absurd beliefs, but there isn’t a single rational argument of even wobbly validity that would serve to bolster the conclusions or their underlying precepts. Nevertheless, they serve as the organising principle for countless lives, and, if these pathologically deluded apologists have their way, for government and society as well.

And yet these same people, who claim to be rational, look with tolerant amusement tinged with superior contempt at the religious beliefs and behaviours of other people.

I have described to religious people from the west the death-related practices of the people of Toraja. The Torajans have a complex belief system surrounding the death of family members. Death, they believe is not a moment in time, like the switching off of a light; rather it is a long process of transition from this world to the next. A part of their belief is that a person’s soul or spirit hangs around, that is, the person is not really fully dead, until the funeral ceremony is complete.
Death is the most important and significant chapter in a person’s existence and as such, it is marked with elaborate rituals. These rituals include the slaughter of livestock to feed the celebrants, the transportation of the corpse to the final resting place (it can be a tomb, a grave, a hillside cave, or any one of a variety of different places, depending on the specific sect and the geographical specifics within the Toraja area), an extravagant and laudatory feast, the provision of the necessities of continued existence such as household goods, etc.etc.

The Torajans are pragmatic people though. Because ideally it is huge and expensive and the family often needs to save up, the funeral ceremony often takes place months, even years after the passing of the family member, and the service is regularly held quite a distance from the temporary resting place of the deceased (usually in the family home). As the territory in the Toraja region is very rugged, the family will often persuade the corpse of the deceased to help out by walking to the site of the funeral rites. This requires some effort and ceremonies on the parts of the bereaved, but is considered fairly routine, although somewhat fallen out of favour as more and more Torajans have access to modern transportation. Nevertheless, a similar rite is still routinely performed on the beheaded water buffaloes to encourage them to walk from the holding pen where they were ritually slaughtered to the site of the feast where they are cooked.

Describe this to modern, god-fearing, church-going westerners and they usually say, Amazing! as they wag their heads in tolerant wry amusement, what silly things primitive unsophisticated people will believe!
None of this strikes the people of Toraja, indeed of Indonesia, as particularly bizarre.  After all, among the staggeringly diverse cultures of this archipelago, there are many bizarre beliefs and many things that nearly defy belief; after all, it was on Flores Island that “the Hobbit”,a diminutive proto-human was discovered to have lived; it is on nearby Komodo that the prehistoric looking and only recently discovered to be venomous Komodo Dragons live, and it is in these waters that the coelacanth, long thought to be extinct, actually thrives. Moreover, unlike the christian death cults, the Torajans have genuine evidence supporting their world views. They have witnesses, even photographs of their rituals working; most Torajans claim matter-of-factly actually to have seen at least the walking dead livestock, if not family members.
Indeed if the claims of christianity were subjected by christians to the same sceptical scrutiny as the Torajan belief-set is by Torajans, christianity would crumble for lack of evidence.

Nevertheless, the cults persist. The unhealthy obsession with death and dying which characterises so many religious beliefs seems to be particularly hard to let go. But at least in Toraja, they deal with it honestly…they confront death with all its grim reality of decay and grief. The christian cult on the other hand, has sanitised and ritualised the obsession, so that there is an element of plausible deniability to employ when accusations of its being a death cult are levelled.

Either way, the cults rely on belief in the impossible. They both employ extraordinary claims, which as every high school student knows, require extraordinary evidence. Christianity has none; the Torajan walking dead have living witness accounts and photographs; in neither case is the evidence sufficient.
Nevertheless, Toraja bears investigation…I intend to go there (it’s just a flight to Makassar and a road and jungle trip from there) in burial season when it starts in June, just to look around for myself…unfortunately, christianity doesn’t even offer asimilar opportunity for empirical observation.