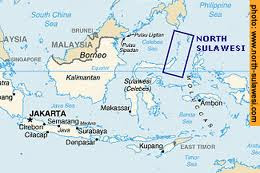 Manado is the provincial capital of North Sulawesi, part of the island chain formerly known as the Celebes. The city of Manado has a population of around half a million people, the majorityof whom are Christian with a Muslim minority, making this town a bit of an anomaly here in predominantly Muslim Indonesia. Although everyone here must identify himself or herself as being an adherent to one of the six (Islam, Protestant, Catholic,Buddhist, Hindu, Confucian) religions recognised in the constitution, these formal religions are a more or less thin overlay of conformity on top of ancient traditions of animism and pantheistic worship. Nevertheless, this partof Indonesia has long been relatively free of outright sectarian violence. The area continues to be populated by people of Minihasan descent.
If Minihasa sounds familiar, it may be because eighty miles south of here is Minihasa Raya, the enormous open-pit  gold mine run by the Denver Colorado based giant resource extractor, Newmont.In 2004, Newmont was accused of polluting the spectacularly beautiful surrounding waters of Buyat Bay and, after a long-running trial for some 133 million dollars in damages sought by the Indonesian government and the people of the area,  a 30 some odd million dollar settlement was reached. There is little realistic question that this entailed a multimillion dollar under-the-table payment to the officials who negotiated the deal on behalf of Indonesia. Billionaire financierand then-chief economics minister Aburizal Bakrie led the Indonesian negotiators.
I knew Rick Ness, the presidentof Newmont Indonesia at the time, and I could see how strong the Indonesian positionwas. Forget whether there was genuine ecological damage done; Rick maintains it was all bullshit. Disregard the conflicting environmental assessments done by various scientific research teams representing and funded by differentinterests. Indonesia held a good hand. They had placed Rick under city arrest and he was to be tried in one of Indonesia’s notoriously corrupt courts and face a twenty-plus year jail sentence if some agreement wasn’t reached. Now that’s a negotiating posture.
***
When I first moved here for the year or so I expect to be in Indonesia, I thought that this small, provincial citywould be dull and lacking in any interest after the climate, food, and thediving had been covered; as a journalist, I should have known better.
http://www.youtube.com/get_player
Please forgive this video…I accidentally hit the record button
on my camera while I was lining up the shot below.
I’ll leave it here just for the hell of it, but I’ll do better in the future.
Just yesterday as I was negotiating the price of a new laptop at a computer show, I noticed groups of teenage girls walking around the mall and the streets dressed in white wedding dresses.In groups of three, four, ten or more, they were everywhere. I finally got the answer. According to a security guard at one of the many waterfront malls, there was going to be a mass wedding ceremony later that day at the provincial museum; there were over two thousand couples registered and they were going for a Guinness world record. Apparently Guinness is pronounced “gwy’nis” in Indonesia.
***

Even more intriguingly, later that same day, I ran across a story out of Manado that resonated because of myexperience having taught journalism.

It is, or used to be, an axiom among reporters that “dog bites man” is not newsworthy whereas “man bites dog” on the other hand might have some publication potential. Not here in the    Sulawesis. Here the story was definitely a “dog bites man” story. It seems thata Manado man went away for two weeks, leaving his collection of dogs without food or water. When he returned, he was apparently devoured by the famished animals. They had paid particular attention to his head, it is reported; theskull was found in a different room from the remainder of his body, stripped of   flesh.
In a town where the people  routinely eat dogs, and where they can be bought either dressed and butchered,or alive in most markets, there seems to be something faintly equitable about this story, as well as proving the exception to the journalistic rule. The dogs after all were almost certainly being kept for food; it’s a virtual certainty that they weren’t pets.
***
The naked city has half a million stories and these have just been a few of them; it leads me to suspect that there will always be something of interest here. So the time I spend between travelling on assignments and my personal business in Jakarta might not be as stultifying aspreviously feared; I’ll keep my ear to the ground.
…enditem…