What can a poor boy do…
Patrick Guntensperger
Manado, North Sulawesi
I have been waiting to comment on the “Occupy…”movement and protests until it became clear that there was more going on than aflash protest or two, destined to fizzle like damp firecrackers. Clearly,though, this movement has gained some traction and it may just become a seminal movement of this decade. The best possible indicator of the effect the movement is having is the hysterical backlash it has inspired; when the right wing crazies come out of their bomb shelters and start screaming for capital punishment for peaceful protesters, and calling for mayors and the police to unleash dogs and take flamethrowers and bulldozers to tent villages, it is clear that a nerve has been struck and that what the movement has to say is worth listening to.
So,a little background is in order here. The whole thing started as recently as mid-Septemberof this year as the “Occupy Wall Street”movement. Just a few months later it has become a world-wide movement and has inspired the kind of passionate posturing on both sides that hasn’t been seen since Vietnam war protest days.
Initiated by Canadian activist group Adbusters, the participants are mainly protesting social and economic inequality, corporate greed,corruption and influence over government—particularly from the financial services sector—as wellas lobbyists and the joblessrate. The use of the slogan, “We are the 99%“, refers tothe difference in wealth and incomegrowth in the U.S. between the wealthiest 1% and the rest of the population.[1]
“Occupy”protests are now taking place in urban centres all over the world as well asthe first one in New York’s Zuccotti Park, in the Wall Street financial district.
Clearly,as any quick look at the statistics and the progress of the West’s financial debacle will show, the protesters have something to complain about. While they have frequently been criticized for not making any specific demands, it seems that this is a fairly shallow complaint, as the protest is not intended to have demands met, but rather to bring the situation to the attention of the non-protesting portion of the 99%.  If there are any implicit demands, they would apparently be that the vast majority of citizens demand a more equitable distribution wealth and a reconsideration of the laws that allow the wealthiest to maintain their death-grip on the wealth of nations. The protests are intended to wake people up to the fact that a privileged 1% have stormed the castle and have now pulled up the drawbridge and left the rest of us outside tilling the fields to support them.
These are not empty complaints, as the last time in US history that there were numbers like the ones we see above was in 1928, just before the crash that precipitated the great depression. And the numbers in the charts have gotten considerably worse since 2007. 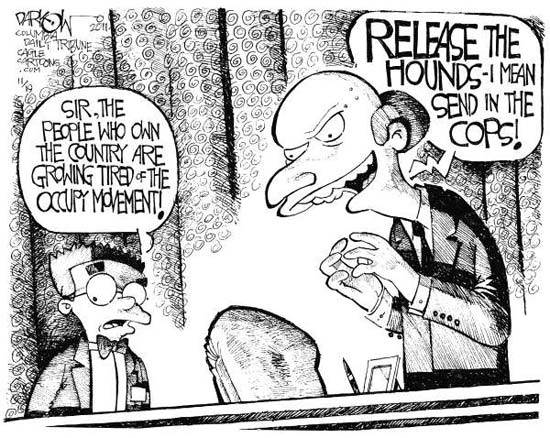 Thus far the protests have been peaceful, with the exception of the over reaction of a number of police forces who have busted a few heads. 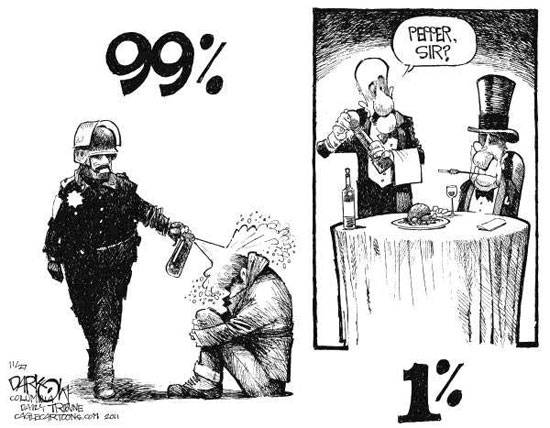 It is worth watching to see how this movement will develop.