Sintesa Peninsula Hotel
Manado, North Sulawesi, Indonesia
Patrick Guntensperger
The Sintesa first caught my eye when I saw a large banner on Sudirman Street in downtown Manado advertising a “beer buffet” for 80,000 Rupiah (less than $10.00). The banner was stretched in front of the Aston Hotel, so I assumed the lounge in which the buffet was advertised was in the Manado branch of the familiar Aston chain, but such was not the case. I checked the Aston and no-one there had heard of it, so I called the number on the banner. That’s when I found out that the “beer buffet” was in a lounge at a large, imposing, relatively new (2008) and ultra modern 5-star hotel perched on a hill overlooking the city. It might overlook the ocean or the harbour, but as I was there during crepuscular hours, I couldn’t tell. 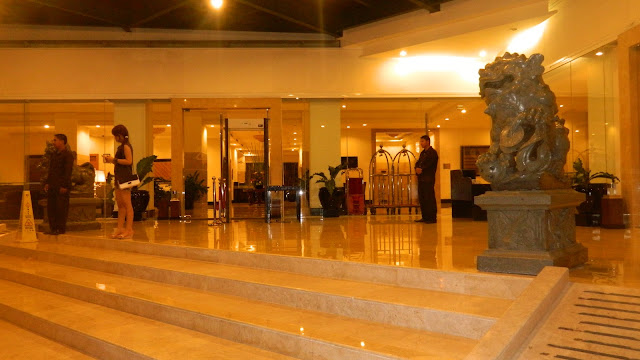 At the Sinesta I made inquiries regarding the “beer buffet”, asking where it was held and what exactly it was. I somehow pictured a buffet with a variety of beers from around the world nestled in ice, there for the sampling. After the concierge initially sent me to the wrong restaurant, I found my way to “The Deluxe”, one elevator stop below the lobby. This turned out to be what is known in this part of the world as an “executive karaoke club”.
Karaoke clubs fall into two distinct categories and should never be confused. “Family karaoke” clubs are just that…places where the whole family can go for an evening of off-key warbling to familiar (at least to an Indonesian family) pop songs. I’ve never been to one but it sounds ghastly.
On the other hand, there are “executive” karaoke clubs. These are clubs that cater to well-heeled male clients. There is usually a bar and a karaoke stage with microphones and the usual screen for lyrics and insipid videos; this is set up in front of night club-type tables that tend to be populated with profoundly plastered batik and business suited (or police and military uniformed) patrons with over made-up and under dressed (and apparently under-aged) hostesses sitting on laps and fetching drinks.
Apparently the real action is in the various VIP rooms. These are simply living room-sized plush private enclaves that provide TV screens, microphones, personal hostesses, and, importantly, sofas.
The Deluxe is one of those. It is labyrinthine, dark, and designed like a Stanley Kubrick science fiction set. Nevertheless it is fitted out with all the necessary elements, including a cast of teenage girls and boys, the size of which would have aroused Cecil B. DeMille’s envy. Some of the cast members are bartenders (the boys), some of them are cleaners and waiting staff (boys and girls respectively), and some are hostesses (girls). At 6.30 PM when I arrived, the cast was just getting prepared for the evening and I was the only patron there. Nevertheless I was immediately assigned a hostess/guide who showed/followed me around as I snooped around the premises and finally departed when I told her that pretty though she was, her services wouldn’t be required, as I intended just to sit at the bar for a single drink.
It turned out that the “beer buffet” was nothing more than prepaid unlimited consumption of draft Bintang beer for eight hours. In that I had just left Yolanda to take JJ to a nearby mall for a spot of shopping and to play in the indoor playground for an hour or so, I couldn’t imagine a less attractive offer: bad singing and eight hours of cheap beer and expensive whores. Nevertheless, I sat at the bar and had a scotch while I tried to soak up the ambience.
From that bar stool, I watched the bartender filling orders for the private rooms. The orders consisted of mocktails (presumably for the hostesses, and charged at booze prices) a pitcher of draft (“beer buffet”, after all) or a glass of whiskey, some Red Bull for energy, and a condom or two, depending on how many clients had booked the room.
It was difficult not to reflect on this latest example of the stark contrasts one is repeatedly exposed to here in Indonesia. While I was sipping overpriced Johnny Walker and politely declining my hostess’s offers of a VIP room, one floor above us young families were dining in the sultry night air while watching as their children disported themselves in the dramatically night-lit swimming pool.
I finished my drink and, since I had some time before I expected to meet my family, decided to check out some other aspects of the hotel which had been built since the last time I had been in Manado. It took twenty minutes and numerous consultations among the bartender and various other staff members to get my bill; it hadn’t occurred to me that a credit card would be a relatively rare sighting in an establishment that almost exclusively deals in cash.
I first went upstairs to the flagship lounge off the enormous lobby. On a huge screen some American fantasy film was playing with no sound and Indonesian subtitles; there wasn’t a single customer in the vast, open lobby bar. I tried to negotiate a martini, but the pretty teenaged girl tending bar couldn’t understand that by “dry martini” I didn’t mean Martini and Rossi dry vermouth. When I described the cocktail, she was all set to provide me with a shot of warm gin with vermouth on the side and a bowl of olives to snack on. She was bemused, but prepared all the same, to stir the gin, rather than shaking it. I gave up and had a second scotch.
On to the restaurant, also off the lobby.
At the Maitre’ d’hôtel’s desk there was a sign offering their chef’s special tribute to New York deli fare. I determined that I would order the first Reuben Sandwich I would ever have had in Indonesia. While I waited for it in the huge poolside restaurant, I watched one table with three businessmen deep in discussion and chain smoking kretek, one with a beautiful, designer Indonesian trophy babe with impossibly long legs talking away on her Blackberry, and a wealthy couple eating while their screaming spoiled children splashed about in the dramatically lit swimming pool overlooking the night lights of Manado; apart from us, the hundred-plus seats were empty. 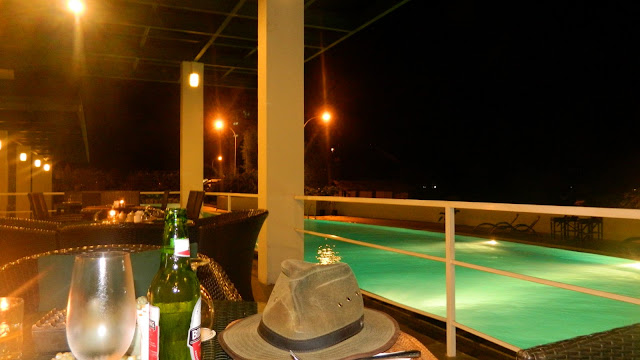 My Reuben, when it came, was, shall we say, interesting. Rather than mustard, the chef had slathered the light rye toast with mayonnaise, and as a substitute for sauerkraut, the chef had provided sweet, creamy coleslaw, complete with raisins. I’m not entirely sure what kind of shredded meat was provided, but it sure wasn’t pastrami or deli smoked meat. I didn’t ask. As a condiment, however, a little dish of sambal (very hot chilli sauce) had been provided for dipping.
All in all, fewer surprises than I expected and very charming, if inept, service.
Great to be back in Indonesia.
…enditem…