Good Bye GOP
How the Republicans have managed to destroy themselves, and maybe the country
Patrick Guntensperger

It’s hardly a secret that the Republican Party that is dug in and determined to destroy the current President of the United States of America, the Democrat, Barrack Obama, is no longer the party of Abraham Lincoln. Their current political and legislative aims have nothing whatever to do with the best interests of the country or their constituents. They have more important matters for which to fight. More than one prominent Republican publically and virtually all of them privately have made it clear that their primary, if not sole, political, legislative, and personal priority is to remove Barrack Obama from the White House.
It hardly required their confirmation of what had become excruciatingly obvious from the early, heady days of the health care bill battle; whatever the President wanted would be met with vitriolic screams of objection. That the health bill that was passed and nevertheless continues to be referred to as “unconstitutional”, and “socialistic”, even “treasonous” by the very members of the bodies that voted it into law was pretty clear evidence of that. The fact that the health care bill that was finally passed contained nothing that wasn’t previously proposed by its current decriers is irrelevant to those who try to portray the President as somehow anti-American.
All of that is palpable and easily understood by anyone who takes even a moment or two to examine the record. But what isn’t clear, or at least hasn’t been discussed at any length is that the hypocrisy and duplicity of which the foregoing is only the smallest example, is the death knell of the GOP. My prediction right now is that the Grand Old Party, the Republican elephants, are headed for their graveyard. 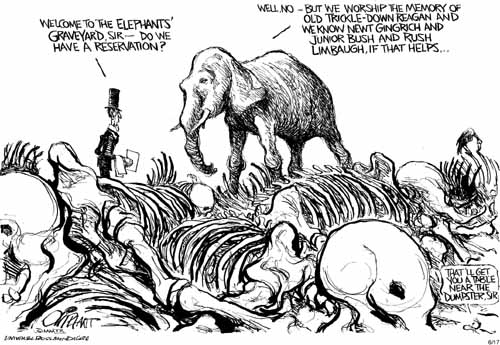 I’ll hedge that by pointing out that I mean that they will soon be finished in the same way that the Republican candidates for the presidential nomination intend to end Medicare: it might retain the name, but it sure as hell won’t be what we used to mean when we said “Republican”.
In the late 20th Century, Republican Presidents included Dwight Eisenhower, who was responsible for the largest construction projects the world had ever seen; he spent, with great public support, more money on infrastructure construction, and public works programmes than anyone before or since. His period is looked back upon – by REPUBLICANS – as a Golden Era. That was the period when the world looked up to the United States as the shining example, the city on the hill that would show others the way. The Republican dogma today is that public works projects are not a government responsibility. It has actually been suggested that if bridges and roads are genuinely necessary, private industry will step in and do it out of an entrepreneurial spirit.
One need only drive through the United States today and see, as I have recently, that despite its posturing, the US is a 3rd World country. By virtually every definition that distinguishes a developed nation from a 3rd World country, the US now falls into the latter category.
The spread between the rich and poor, the distribution of wealth, the national debt, and the lack of universal health care all clearly define the US as a less than developed nation. On the social side, the embarrassing education level, the retention of capital punishment, the racial imbalance in prisons, the gender imbalance in laws, and the formal tolerance of war crimes and other abuses clearly leaves the US back in the pack of those countries that understand and desire progress. A 3rd World country by most definitions.
And this all ties in to the original point of this piece which is that the Republican Party is in the process of imploding.
No rational person can believe that the insanely right-wing politics of the Tea Party and other nutjobs on the fringes of the GOP represent the actual thinking of mainstream right-of-centre Americans (or anyone else). Nevertheless, the Republicans need to choose a candidate to run against the Democratic incumbent in 2014 and every single candidate for the nomination is kow-towing to them and trying to position him or herself to the right of the nearest opponent.
At a recent Tea Party- sponsored debate, Texas Governor and candidate Rick Perry was hugely applauded when he bragged about the number of executions carried out in his state (a number that, if extrapolated would lead to over fifteen thousand executions a  year in the only nominally developed country that even has a death penalty). On the same stage, when asked if a coma victim without proof of private health insurance should be treated, the candidate Rand Paul thought letting him die would be the fairest option to a round of shouted cries of “let’im die!” 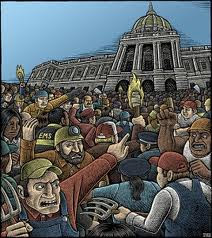 Each of these candidates has to pander to the bloodlust of the knuckle dragging, pitchfork and torch bearing louts who show up to Tea Party events and, for that matter, Republican primaries. They haven’t a prayer (and that’s really important) of the nomination without convincing that group that they are as heartless, as uneducated, and as stupid as their supporters. So they do it.

It must be skin crawling to any of the candidates who has an iota of economic education, scientific knowledge, or even human decency to have to mouth the garbage that they all so piously espouse at this point in the process. And I have to assume that it is all political posturing, because I have a higher opinion of human nature than they lead one to.
Their problem is the American people. They are not that stupid. They are not that hateful and heartless. Despite their educational level, they are not that ignorant. They won’t elect a president that represents that lowest possible denominator. I have too much faith in them for that.
And that means that any party that would nominate one of the current candidates has no more relevance. The GOP is finished until it rejects the politics of hatred. As long as the tail is wagging the dog (as I sincerely hope it is) the dog ain’t got a chance. I believe that the American people are neither as hopelessly stupid nor as mean spirited as their candidates have to be to win the nomination. I have a great respect for the people of the United States of America; they will reject the idiot politics of hatred and rally around a rational leader. Right or left of centre.

What the Republicans have done is created a system in which to achieve the nomination, each candidate must try to position themselves farther to the right than the next. This is getting harder to do; Attilla the Hun would seem too radically liberal to the fanatics who vote at GOP primaries. The problem is that the Republican nominee, by going on record with the necessary pandering to the lynchmob, will have made him or herself unelectable in a general election. Because at a general election, rational, oxygen-breathing people vote. And thus far, at least, Americans still have some vestigial suggestions of rationality. Let’s see if those survive until 2014.
…enditem