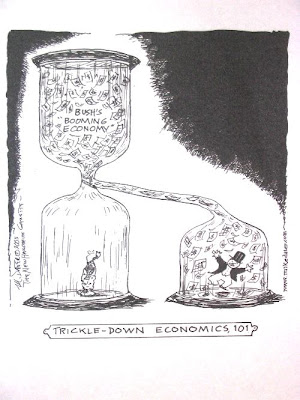 Just a quick thought. I’m watching the insanity of US politics play itself out over a debate regarding the US economy.

The lunatics in the Tea Party faction of the Republicans are still arguing (and prevailing) that if we ensure that the wealthiest stay wealthy and get wealthier, the benefits will trickle down to the lowest income families.

This, of course, has been tried and failed abominably. When this theory was put into practice, all that occurred was that the spread between the poor and the rich in the country expanded exponentially.
The additional profits major corporations enjoyed, far from trickling down in the form of an expanded job market, simply increased corporate bonuses for the already inflated salaries of the wealthiest wage earners in the world and added bonuses to the richest directors of major corporations. They created no net new jobs.

On the other hand, when the middle class is given a break in the form of tax cuts or additional entitlement programs, it has been demonstrated (see Clinton or FDR’s economic plans) that the beneficiaries of those benefits go out and spend more, thus creating additional legitimate profits for the same corporations subsidised by “conservative” economics, and thus creating millions of new jobs.

It is becoming more and more obvious that the radical right wing economic “reformers” care nothing for genuine economic progress, or even recovery, and are only interested in satisfying the demands of the contributors who put them in office. The hypocrisy is plain.