Patrick Guntensperger
Parksville BC Canada
Blockbuster video stores in Canada and elsewhere are no more. In my lifetime I watched their birth, their spectacularly successful life, and now their fizzling into nothing; an experience like watching the life of a star from its origin to its burning out as a supernova in super fast forward. 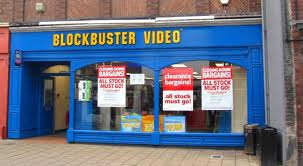 The very first video stores opened while I was in university. Only a small number of people had video players; they were big, clunky and about evenly split between the Betamax and VHS formats. At the time you could buy videotapes in either format, but they cost in the neighbourhood of $100 apiece and it was at least a year from their theatrical run before they were available for sale. This created a niche for the movie rental business. It was, by corner store standards, a fairly capital intensive business, and the cost of rentals had to be pretty high before the average mom and pop operation could start to show a profit on any given tape.
Meanwhile the Betamax and VHS formats were duking it out for market domination. Betamax was unquestionably the superior format; more compact, able to hold a frame frozen and visible when the pause button was hit, sharper, clearer, and generally superior in every aspect. Nevertheless, VHS won the marketing wars because Sony, the patent-holder for Beta, made one of the 20th Century’s great case studies for marketing fuckups.
It’s all fairly complicated but it had to do with the fact the Sony’s Beta format could tape, but not playback on their Beta cameras, which VHS could do, and then Sony took the high handed approach of limiting their licences for use only with other Beta equipment (try to imagine a software company trying to market computer software that could only run on Mitsubishis or whatever). Unfortunately for aficionados of real quality video, the Betamax market declined rapidly until the last Betamax was sold in 2002. As an aside, Beta is still such a superior format that one can buy Beta movies and equipment on EBay and elsewhere, not as curiosities, but as the choice of connoisseurs. Naturally I went the Beta route and found myself out in the cold just a few years into the ‘80s. Moreover I never thought to save my tapes or hardware for the EBay market, the Internet still being a gleam in Al Gore’s eye.
Back in the video stores, the big money guys saw a real opportunity. While, because of the purchase cost, Mom and Pop had to choose their movies carefully to appeal to their customers, deep pockets could buy copies; even commission the transcription from celluloid to video of every new movie that came along. So Mom and Pop in some neighbourhoods could compete by having a limited inventory of, say, classic films, or cult films, or musicals, or just the latest releases. But Blockbuster led the pack. It produced its own video versions of all of those kinds of films, bought dozens of copies of popular new releases and single copies of every obscure, cult, classic, or idiosyncratic film available for each outlet. Mom and Pop stopped even trying. Individual, non-connected video stores went the way of shoeshine concessions in railway stations.
That is, any individual non-connected store that tried to cater to a general clientele. In the dark corners of the retail world some individual operations stayed in business; they were the ones that had found a specific interested group of buyers. Since Blockbuster had fastidiously marketed itself as a “family” outlet, many small operations maintained their viability by offering the adult fare that Blockbuster was too high-minded to offer. That became the bread and butter income but the marmalade was the specialty stuff; the classic film noires, the sci-fi, the cult flicks – virtually any hard to find item. 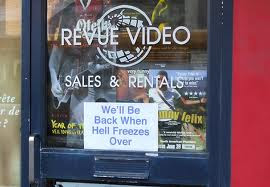 Then, as any of the big chain predators do, having extinguished any serious competition, they cut back on their service to their customers. Beann counters got rid of them. It became harder and harder to find the specialty films; the John Waters flicks, the silents, the unknown classics. They weren’t making Blockbuster enough money, so the bean counters went with the sure thing…blockbuster mainstream releases.
But being bean counters they only looked at the spreadsheets. And spreadsheets have one major problem…they show what has happened; they are historical in nature. Spreadsheets are backward looking; Although Blockbuster anticipated the move from magnetic analogue to digital, it didn’t really foresee the digital age. Sure, BB started to rent DVD copies of films, but the smell of death was already in the air. 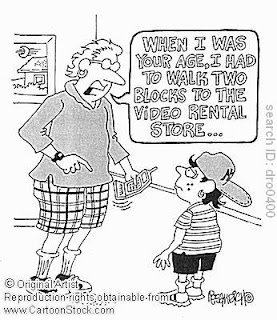 The Internet and the proliferation of personal digital equipment from desktop and notebook computers to 4G phones, IPads, and a half dozen other technological methodologies capable of up and downloading the digital information that comprises a movie were not predicted on the spreadsheets. The result was that more forward thinking big companies like Netflix offered better, quicker, and even cheaper delivery systems for movies.
One can now download films, get new releases on demand through your cable company, and generally access cinema products in a variety of cheap, easy ways. Virtually nobody takes the time to go to the video store, physically sort through the DVD stacks, pick up a bag of microwave Orville Redenbacher’s and go home to stick the disc in the player. The Blockbuster model died in the same way that whalebone corset manufacturers disappeared from the landscape.
What’s left, though, is the mass marketing of the Blockbuster model: homogeneity. To make the most money, the companies offering films online tend to focus on the big new releases and the most popular oldies. You’ll always be able to find this year’s comic book superhero come to life, or in the summer, Will Smith’s latest, and you’ll be able to find Casablanca or Citizen Kane. God knows it’s easy enough to find porn online. But where does one go to find the truly obscure films, the one star monster films of the fifties, the avant garde sixties work of people like John Waters, the silent non-Charlie Chaplin-or DW Griffith flicks? The largest common denominator has suppliers tripping over each other to flog their offerings but it takes some real sleuthing to go outside of the ordinary.