VANCOUVER, CANADA – Only hours after a hockey riot tore downtown Vancouver apart, leading to hundreds of arrests, smashed windows, looted stores, several burnt and overturned cars – including at least 2 police cars, and an uncounted number of injuries, the West Coast Canadian city has once again demonstrated why it has repeatedly been ranked among the most liveable cities in the world. 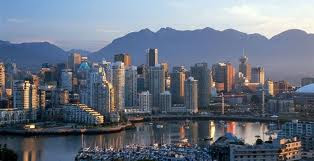 The morning after the violence, thousands of ordinary Vancouverites once again flocked to the city centre; this time they were bearing brooms, shovels, and garbage bags. Volunteers, not organised, and mostly strangers to one another worked together to put the lustre back on what was just three days ago one of the world’s most beautiful cities. Unasked and unrecruited, an estimated 15,000 people took to the streets on a workday and began the process of sweeping up the broken glass, painting over scorched and soot covered fenestration on businesses and residences, and helping merchants board over or replace their broken storefront windows.
Denise Ryan of Postmedia news reported that city maintenance workers noted the first volunteer showed up at 5 AM with a broom and some bags and simply said, “Where do you want me?” Throughout the day more and more people arrived, one woman with forty brooms to distribute to less-prepared volunteers, dozens of others, including elderly suburban residents, arrived bearing Tim Horton’s coffee and donuts for the ad hoc cleanup crew. Downtown Vancouver, being on the west coast, also saw volunteers arrive with supplies of granola and herbal tea for tired, unpaid and anonymous workers. 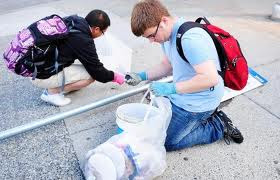 By the afternoon, the downtown core, which had resembled a war zone, had begun to take on a festive air; boarded up storefronts were decorated with colourful positive messages. “We love Van!” was seen swabbed in calligraphy on many of the damaged businesses that had to be boarded up pending permanent repairs. As the cleanup took on a party atmosphere, buskers began to arrive to entertain the volunteers who seemed never to take a break; they even refused the coins the volunteers tried to toss their way.
Within a single working day, most evidence of the hockey riots had disappeared or been beautified. Meanwhile several websites have been opened to help identify the hooligans responsible for the destruction. Hundreds of videos were shot of the carnage – some, unbelievably, by the rioters themselves who also had the profound intelligence to post them on the web. In dozens of cases the looters’ faces are clearly visible, giving high fives for the camera as they do their damage. Arrests are, of course, imminent. 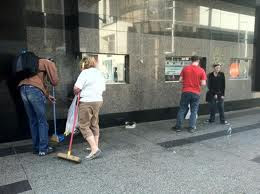 Thanks to all those who contributed; your efforts have done much to redeem Vancouver in the wake of the damage done. Once again people can be proud of this city.
…enditem…