Well, if there are any of you still out there, it’s time for me to let you know that I’m back in town! Not Jakarta; I’m still in Parksville, British Columbia, Canada. It’s just that after more than a year of complete absorption with the care of my parents, I now have the luxury of having the time and the focus to begin to post here again.

Over the last year and several months, it was always my intention to post as regularly as  I had done in the first few years this blog was up and running. However, I underestimated the amount of time and energy it would take to provide full time care for two elderly people with terminal illnesses. For twenty four hours a day, seven days a week since late 2009, I had been occupied with feeding, medicating, bathing, grooming, comforting and otherwise caring for my Mom and Dad. I, and Yolanda when she was in Canada and not with our son JJ in Indonesia, handled their finances, did all the shopping, cooking, the yard work, the housework, brought them to medical appointments, did their laundry, ensured that oxygen, walkers, and other assisted living aids were used. Our lives were entirely absorbed with the day to day realities of caring for dying people whom we loved very deeply. 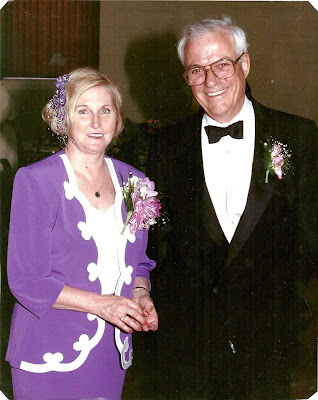 Both of my parents have now passed away.

In so many ways the time we spent together was profoundly rewarding, but it was very sad, too. My parents got to know my wife and appreciate her inner and outer beauty. My wife got to know and appreciate two of the kindest and most loving people in the world. And I got to appreciate all over again the strength of character and the complexity of these two marvelous people.

My mother was diagnosed with lung cancer in early summer of last year; a cruel irony as she had never smoked and found others smoking in her presence objectionable. Nevertheless, she was sufficiently gracious that she never made an issue of it, and it is entirely possible that her graciousness killed her with second-hand smoke. Mom was extraordinarily stoic about her inevitable death; she insisted on doing as much gardening as her pain would permit for as long as she could. Later on, as the pain increased, she became steadily more and more housebound and dependant on pain killers and oxygen. Mom wasn’t ready to die in November; there was so much left undone.The tragic circumstances that had cost her her daughters remained unresolved (see posting of May 11, 2010…Cruelty as a Way of Life) ; neither of them had recanted or even acknowledged the vicious cruelty with which they had tormented my mother for the last twenty years of her life.

By October, Mom was in such brutal pain that she was unable to get out of bed for any extended periods of time; her appetite had diminished to the point that she was surviving almost entirely on meal replacement liquids and morphine. Morphine addiction has the inevitable side effect of causing paralysis of the bowels, requiring that she have regular enemas, robbing her of one of the few remaining vestiges of her dignity. She was at home until twenty-four hours before she passed…she knew it was coming, but she was very much afraid of not knowing what was coming.

In the hospital, the night before she died,we tried to give her some relief and let her sleep, but she had built up a need for and tolerance of opiates that would make Keith Richards shake his head in disbelief. Finally, as she had previously requested, we filled her with enough morphine to dull the pain and shut off her life support.

The next few weeks were not a great deal of fun either. My father’s Alzheimer’s was progressing.

I don’t believe in heaven or hell, but if I had to come up with a good definition of the latter, it would be what my Dad went through in the weeks following the death of his love and life partner of over sixty years. For weeks he would ask at least once a day, “Where’s Mom?” or “When’s Mom coming home?. Having had to have her death broken to him daily was as painful an experience for Yolanda and me as well as for my father as I could ever imagine. Eventually, he came to accept her passing: we had her urn put in the living room and he would spend hours staring at it. Occasionally a tear would escape.

When he seemed to be sufficiently reconciled to the reality that Mom was never coming home, Yolanda had to return to Indonesia to be with JJ while we continued the fight to get him out of Indonesia, so Dad and I were on our own once again. We spent the winter together watching television, as his ability to remember what he was reading had diminished to the point that he could read the same page dozens of times without realising it.

He was experiencing depression, accompanied by ever increasing fatigue. Nevertheless, he kept planning for the future. I’d take him for a walk every day that the weather permitted and the walks became shorter each day. Fortunately, though, he never remembered that and was certain that each day he was improving. He expected to graduate from his walker to a cane and then to recover completely.

Now he would ask daily, “Where’s Yolanda?”. And when I told him she’d be back in a few months, he would have plans to travel across the country so he could show her more of his Canada. Each day he slept more and more. Always a disciplined man, it was unthinkable for him to lounge around the house in pyjamas and a housecoat; each morning I would help him bathe, shave, and dress for the day. By then he would be so tired from the exertion that he would need to lie down. I’d cover him and make sure that he had his cat on the bed with him. By early afternoon, he would be sufficiently recovered to get up to eat: he always refused to take his meals in bed.

One morning at the end of March, I helped him bathe, brush his teeth, and shave and took him back to his room to dress. He told me that he was too tired to dress right now and wold take a nap first. I laid him on the bed, covered him, got Marley the cat settled at Dad’s feet, then sat with him stroking his forehead and holding my hand over his folded ones. He took a deep breath and said, “Boy, am I ever tired!” He breathed softly for a moment and then he died. I could feel his life slipping away as I sat with him; he released a small death rattle and his suffering was over.

I didn’t try to resuscitate him (he had long ago signed a “do not resuscitate” order), but sat with him for a while. I then called for the medical techs and the coroner; within forty five minutes my Dad was in a body bag being taken to the mortuary where he would be cremated and his ashes put into an urn that matches my mother’s.

Yolanda took the first flight back from Indonesia that she could arrange and was here to see him laid out in the mortuary. There was no service ,as he had requested, but some very close friends came with us for our final good byes.

It has taken since then for Yolanda and me to get past the acute part of the grief process. The pain is still there and probably always will be, but it is tempered with memories of happier times and gratitude that we had these last months with them. I, at any rate, will probably never be completely over their deaths; I still find myself occasionally turning to my father’s chair to ask him what he thinks of something I’ve just read or seen on the news. I still ask what my mother would do when confronted with a dilemma while cooking something new. But it gets better each day.

Now Yolanda and I have to consider our own lives. We have at least tentatively decided to stay on in Canada, assuming we will be succesful in extricating JJ from Indonesia; we want our son to be brought up and educated here until he is old enough to decide for himself which country he would prefer. Yolanda will go back to Indonesia to pursue the holy grail of having our son with us while I try to reestablish a career. This isn’t as easy as it sounds, being fifty-five years old with no recent working experience in Canada and a distinct lack of contacts in the publishing business.

Nevertheless, I am in discussions with Vancouver Island University and I’ve been in contact with a number of editors of a number of publications, with whom I’ll sit down and go over my portfolio of published work…an excersise I haven’t had to engage in for decades.

Of course if none of this works out, I’ll probably sell the house and move back to Indonesia. I could always start writing about Southeast Asian politics again; there’s never any shortage of material there! In the meantime, I promise to try to post regularly again.