Anyone who reads the articles on religion and the supernatural in this blog, or in anything else I’ve published, knows that I have some philosophical and logical difficulties with religion. A number of people have taken the position that if I don’t believe that we are created and watched over by a god who defines what is moral, if, in fact, there is no god, then there is no rational basis for morality. That suggestion is often accompanied by the implication that it therefore follows that I, as an atheist, have no business writing or even commenting on ethical or moral issues.
I have started to attempt to formulate a justification for morality independent of any reliance on imaginary all-powerful friends who make up the rules by which we ought to live. There is little that is completely original in the formulation I am attempting; it is more an attempt to explain, using personal analysis and reference to philosophy, how a rationalist atheist can also lay claim to a moral code. This, of course has some impact upon related matters including political theory, legal and judicial theory, and epistemology.
At this point, the formulation I am trying to develop is mostly groping in the dark; I’m not really sure what direction it will end up going, but what I’m blogging here is part of a rough first attempt. 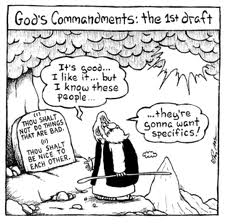