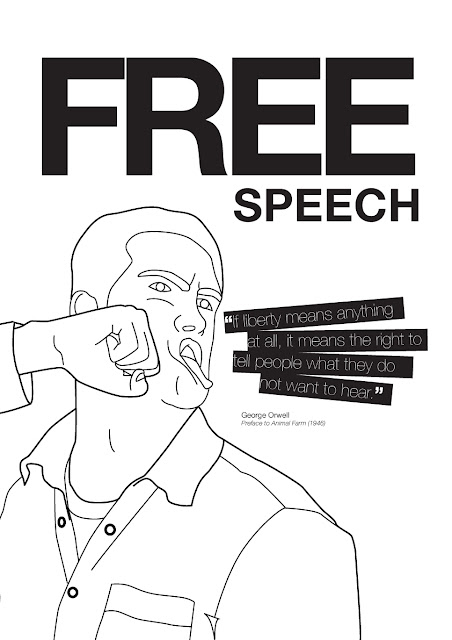 Freedom of expression in Indonesia
January 09 2010
Patrick Guntensperger
Jakarta
Over the last few months, freedom of expression – of speech, of opinion, of publishing the written word, of sending electronic messages – has become a contentious issue here in Indonesia. In this country that has repeatedly called out for greater democratic government, the entrenched forces continue to fight a rearguard action against democratic reform by enacting restrictive legislation, prosecuting violations, and jailing people for speaking, writing, reporting, and even Tweeting in ways that are disapproved of.
Although Indonesia has espoused freedom and democracy after popular discontent escalated to a groundswell movement that forced the ouster of Indonesians the long-time and astonishingly corrupt and deeply brutal dictator Souharto over a decade ago, it seems that the largely Soeharto-established government apparatchiks didn’t get the memo. Among the more pernicious elements of the Soeharto legacy is a bloated and utterly incompetent bureaucracy; moreover there is still in Indonesia a bureaucratic machine, the members of which are utterly corrupt and operate from the paradigm that the people of the country are there to support them with bribes and tokens of respect and gratitude.
There is no sense in Indonesia that government employees are public servants; on the contrary, the view held by the bureaucrats – and to some extent the people themselves out of habit – is that the public is there to beg favours from their betters and to show proper deference and preferably a bribe when they are deigned to be recognised by the their social and economic superiors. The people in Indonesia still see themselves and are seen by government employees as existing at the government’s pleasure and for the purpose of ensuring that the government insiders are kept in as luxurious circumstances as their rank dictates.
One example of this prevailing paradigm is the issue of freedom of expression which has rankled a numbed people and groups in Indonesia. Over the last year we have seen a woman arrested, charged, incarcerated, and forced to pay a fine of some 26 thousand dollars (US) for the crime of having complained about shoddy service she received at the hands of Omni International Hospital in Tangerang. She was charged under the recently enacted and controversial Electronic Information Transfer Act; the act provides for jail sentences for those who transmit electronically any message that might be deemed defamatory. She texted her friends about the poor treatment she had received, and the hospital, in a burst of PR brilliance, took aim at their collective foot and had her charged with a criminal offense.
The hospital’s aim was true; the bullet struck its foot squarely. Rallies in support of Prita, the subject of the furor and the dangerous villain who sent the text in question, benefited from popular support which raised several times the money needed to pay of her court costs and the fine The money is now likely to be allocated to a special fund earmarked for similar cases. Although popular outcry forced the judges to ensure that she was found not guilty in the criminal court system, Omni Hospitals is pursuing the civil defamation suit.
More recently, a young soap opera actress and TV hostess named Luna Maya was reported to the police for criminal behaviour in that she apparently breached the same law. In this case she Twittered something to the effect that Indonesia’s notoriously aggressive and unreliable “infotainment journalists” – read paparazzi – were “lower than prostitutes”. This was greeted with near universal approval, if not outright concurrence by pretty much anybody who has watched their pack mentality in action. Everybody that is, except the Indonesian Journalists Association. It was that bastion of freedom of speech that lodged a complaint with the police alleging that its members had been defamed and that the dangerous criminal responsible ought to be arrested. While that controversy unravels, we ought not forget that there are literally dozens of cases of people’s fair comment being stifled by the law.
Todung Mulia Lubis, the Indonesian lawyer and human rights activist, told me that there are some 26 separate provisions within the Indonesian criminal Code that allow for incarceration for an act of expression. Indonesia has no shortage of laws; in fact laws are routinely passed with the lawmakers openly admitting that they are there to appease vocal minorities, but we are not to worry, because the laws will neither be enforced nor complied with.
In the aftermath of the enactment of Indonesia’s wide sweeping anti-pornography law, when I asked Andi Malarenging, at the time the presidential spokesman for domestic affairs, about the possible impact on art and Indonesian traditional dance, acknowledged that there was room, given the language of the law, for clamping down on these things, but there was nothing to worry about, as the law would never be applied to those things. For Andi, a law that one can simply ignore but whose existence appeases hard-line religious zealots is a good law.
Of course within a week, a provincial governor on Java shut down and banned performances of the traditional jaipong because he found them “provocative”.

Since then, banning books in Indonesia for political content has become routine. Not wishing to “confuse” Indonesians with alternative views and interpretations of history, the military has waded in and banned several books that paint the TNI in a bad light; this has led to a pissing contest with the Attorney General’s office who insists that under the constitution it is the only body with authority to ban literature.
As well there was a minor tempest at the production of a feature film called Balibo. This film, produced in Australia, starring and co-produced by America actor Anthony LaPaglia recounts the story of the deaths of five Australian television journalists during the invasion prior to Indonesia’s occupation of what is now Timor Leste. The Indonesian official position after a cursory “investigation” is that the young journalists were caught in a crossfire and were unfortunate and unintended collateral damage. The film, thoroughly researched, with the stories of some 8,000 witnesses used to reconstruct the events, tells how the journalists were deliberately targeted and murdered in cold blood by TNI soldier at the orders of senior officers.
Balibo, of course, was not permitted to be screened at the Jakarta International film Festival and was not granted a permit for any public screenings. The censor once again determined that the film could “confuse” Indonesians. Despite this, the Alliance of Independent Journalists held a public screening and The Jakarta Foreign Correspondents Club made an open secret of the fact that they could probably help interested people find a good copy of the film, having been in contact with the producers who gave them permission to distribute the picture, even through unconventional underground channels. Anybody who’s interested in what is a very good movie in its own right may feel free to contact via my blog; I can probably fix you up with an authorized copy.
As 2010 gets started, there is serious concern that freedom of speech, freedom of the press, and the general entitlement of Indonesians to be permitted to see and judge alternative and unapproved versions of history and not exclusively governmental approved ideas has become increasingly curtailed. Human rights in Indonesia in this area has begun to retreat in a retrograde action to the days of Soeharto, with the unreconstructed forces holding sway over the open exchange and discussion of historical and intellectual ideas.
So while some advances have been made toward democratic government, the old paradigm of the government forces controlling that which Indonesian see, and are free to discuss and think about has actually gone backwards. Unless a concerted effort on the part of the grassroots and the organisations acting as watchdogs over this pillar of democracy take a strong stance against the incremental erosion of Indonesian’s right to freedom of the press, democracy in Indonesia is little more than an empty label and the country’s human rights are suspect at best, and non-existent at worst.
…enditem…