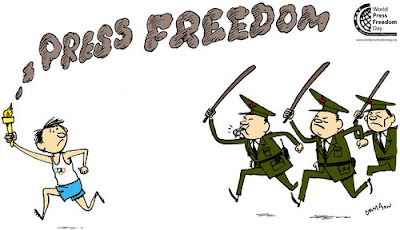 Freedom of expression under assault
Patrick Guntensperger
Over the last week there has been considerable ink expended and much bandwidth occupied with the dissemination of opinions on the controversy surrounding actress Luna Maya’s Twitter post, in which she disparaged the paparazzi, and on how the Jakarta chapter of the Indonesian Journalists Association (PWI), had the police charge her with defamation and violating the Electronic Transaction and Information Law. There have been letters and emails of support for Luna, howls of outrage that people calling themselves journalists would use those laws, and a general trashing of celebrity gossip news.
Enough ink and bandwidth for the government to take notice.
On Saturday, one cabinet minister saw the controversy as sufficiently serious to require him to meet with the president at his Cikeas residence to discuss the situation. Was this a Coordinating Minister who wanted to discuss the ominous direction in which Indonesia is heading with respect to legislation restricting freedom of speech? Was this a minister concerned with the right of the people of Indonesia to express themselves freely and to hear opinions and ideas from all quarters without legal sanction? On the contrary. It was Religious Affairs Minister Suryadharma Ali who wanted to discuss banning “infotainment” broadcasting in Indonesia.
Perhaps the minister had interpreted the support for Luna and the disparagement of celebrity gossipmongers as an indication that the time was right to strike in support of Nahdlatul Ulama’s agenda. As far back as 2006, the NU had declared this type of programming haram, with little discernable effect on the viewing habits of the faithful. The minister is quoted as saying after his meeting with SBY, “I personally agree with NU’s stance that infotainment programs that delve into people’s private lives must be discontinued.”
If that was what spurred the minister into action, it is likely that he misread the tea leaves. Despite the widespread support for Luna Maya, and despite the fact that many genuine journalists agree with her assessment of gossipmongers posing as journalists, and despite even the general contempt in which thinking people hold that kind of programming, there is little likelihood of widespread support for yet another ban on a form of expression.
The minister ought to have considered two salient points. In the first place, celebrity gossip programming ranks with sinetrons as being among Indonesia’s preferred viewing. There won’t be much support for a new ban among that majority of Indonesians.
Secondly, those of us who have supported Luna Maya, castigated infotainment, and disparaged the Indonesian Journalists Association in print are not inclined to support his suggested censorship. The underlying theme to the groundswell was resentment at anyone intruding on the people’s right to express themselves and to hear what others have to say. The last thing anyone was looking for was a further restriction, even on the gutter press. In fact, some of us who took the PWI to task are likely to rally to the defence of the PWI’s members, if there should be any movement toward banning their broadcasts. We won’t watch their drivel, but we recognise their right to speak to the people.
Anyone who believes in the concept of free speech knows that the freedom has to apply to the speech of the narrow minded, the contemptible, the feeble-minded, and those with whom we disagree. That includes celebrity gossipmongers. Those who objected to the assault on Luna Maya’s freedoms were not calling out for a similar assault to be launched on her attackers. Indonesia does not need more restrictions; it needs fewer. 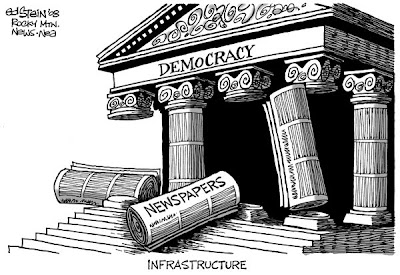 Moreover, it needs to decriminalise slander, libel, defamation, and any other verbal or representative communication. Criminal court is no place for trying these kinds of accusations; these belong in civil court along with other torts. If a person or company believes that harm has been done in print or broadcast, let them sue and make their case. (Or Tweet about it and get it out of their systems).
Reasonable legislation covering these kinds of communications can be drafted without having to re-invent the wheel. A good starting point for legislation to protect people from the excesses routinely practiced by the gossip press would be to impose the three part test that other democracies employ to determine whether the plaintiff has a case or not: The complaint must demonstrate that the offensive communication 1) caused damage, 2) was intended maliciously, and 3) was false. Each of those is a necessary condition and together they are sufficient for a finding in favour of the plaintiff.
With this in place, the gossip press could stay in business, but they would have to ensure that everything they say or print is true. Their victims would be free to file suits that could cripple them financially if they didn’t do the journalistic basics of fact checking and source verification; the prospect of enormous punitive damages would act in place of consciences.
There would be no need for further restrictions on Indonesia’s freedoms through broadcasting bans or restrictions, and there would be no need to impose the ulemas’ religious views on the country as a whole. Decriminalising these matters would free up the criminal courts and allow the police to get with whatever it is they do or are supposed to be doing.
Indonesia’s laws restrict freedom of expression to an extent incompatible with democracy; there are more than twenty provisions within the Criminal Code for charging someone with a criminal offence for something said or written. A reconsideration of these laws is long overdue if the country wants to progress in its struggle for genuine democracy and real liberty.
If this misguided attempt to impose more limits on free speech sparks a backlash, and Indonesians finally stand up and say, “That’s enough!” Religious Affairs Minister Suryadharma Ali’s mission will have had a far more beneficial effect than the one he was hoping for.
…enditem…