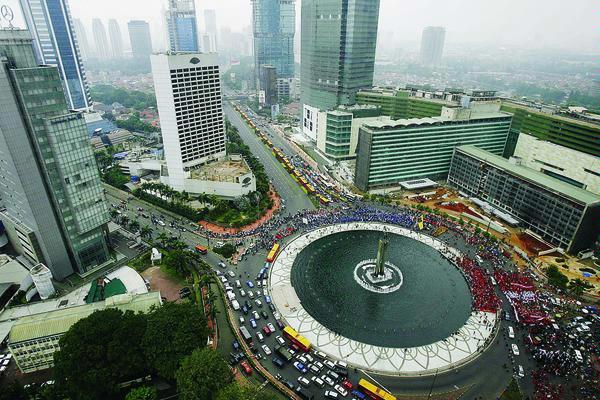 A TYPICAL PREVIOUS DEMO AT BUNDERAN H I
The people speak out
PAGUN
09/12/2009
JAKARTA, INDONESIA – Jakarta’s legendary traffic is expected to deteriorate to virtual gridlock in Indonesia’s capital on Wednesday as the expected rallies in support of International Anticorruption Day get underway. Traffic is being rerouted from the Bunderan HI, the city’s central traffic circle and a favourite place for the nearly daily demonstrations of which Jakartans are so fond, with over one hundred thousand people and some 40 NGOs expected to participate. Even by the standards of a city that will launch a rally, or a “demo” as they are less than affectionately called, for the most obscure of causes, the antigraft numbers represent a genuine groundswell easily capable of bringing things in the capital of the world’s 4th most populous country to a virtual standstill.
The country, still growing into the democracy it espoused after the toppling of long-reigning strongman Soeharto in 1998, has yet to step out from under his shadow and is burdened by the legacy of a vastly and systemically corrupt and bloated civil service. It cannot even be described as an open secret, since there is no virtually secrecy about it, that any government service can be acquired, accelerated, or facilitated through the exchange of money. From a driving licence to a court verdict, it is matter of cultural understanding that what is desired is simply a matter of having the capacity and willingness to pay.
The separation between rich and poor has never been eliminated or even diminished and it is a matter of common understanding and open commentary that anyone with any real wealth in this country acquired it through cronyism, graft, influence peddling, or outright theft, while those without resources have no realistic expectation of any upward mobility. Indonesia perennially ranks near the top of any international list of most corrupt countries on the planet. Corruption is quite simply a way of life in this vast developing nation.
And yet it seems that perhaps the people have had enough.
In July, President Susilo Bambang Yudhoyono was swept to a second mandate largely based on a platform characterised by anti-graft rhetoric. And yet, since he took the oath, his presidency has been plagued by one corruption-based scandal after another, causing his popularity to freefall.
The two salient scandals were the discovery that the police and the Attorney General’s Office appear to have conspired to frame two deputy chairmen of the elite graftbusting corruption Eradication Commission KPK as part of their ongoing attempts to undermine the anti-corruption efforts. SBY’s failure to take a strong position or to become involved in the sordid affair led to an upswell of popular sentiment that perhaps the president’s anti corruption posture was little more than electioneering.
The two deputies, however hit the ground running from the moment they were exhonerated nad returned to work. They immediately focussed their attention on what is becoming a less gaudy but potentially more damaging scandal, this one possibly leading directly to the president himself.
Both the KPK and a parliamentary commission  are looking into the president and his team of economic technocrats’ decision during his last term to bail out the mid-sized Bank Century. The ultimate cost of the bailout turned out to be some ten times the amount originally budgeted, and the charge to save the failing bank was let by then Bank of Indonesia Governor and current vice-president, Boediono, and supported by Finance Minister and anti-graft superhero Sri Mulyani. It is becoming apparent, however, that Bank Century was an odd choice for a bailout despite the administrations insistence that it was necessary to avoid a “domino effect”. The bank was only one of dozens in trouble during the financial meltdown of last year and was only of average size and significance.
Conspiracy theorists, anti-corruption activists, and SBY’s opponents, however, all suggest that the bailout was precipitated by the fact that some of the largest contributors to SBY’s Partai Demokrat, seemed to have had accounts there, and were protected from any financial fallout by their pet administration.
SBY for his part, despite his characteristic tendency to look for compromise, seek peaceful and consensual resolution to disputes and refuse to hold anyone accountable for anything has for the better part of a week been fanning the flames of the already enervated emotions among the people who attended the rally. The president has made numerous speeches intimating the rallies are organised and are likely to be infiltrated by his political opponents and has implied that the demonstrations are little more than an attempted coup d’etat.
Further posts will be forthcoming as more information on the rallies comes in.
…enditem…