I wrote this initially for a magazine in Singapore, then decided to spike it because I didn’t think it was right to use a Singapore outlet for that kind of criticism. It holds true and, given what I’m currently going through, it’s a very mild commentary. 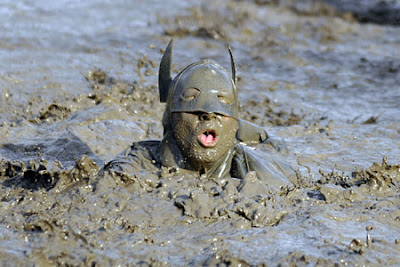 Indonesia is hard to get used to. For a Westerner, some Indonesian traits are positively baffling, requiring a complete overhaul of a lifetime’s behaviour patterns to accommodate. And yet it’s vitally important that something as simple as one culture’s way of saying “no” be understood. As a social and political commentator and a teacher, it’s perhaps even more critical for me to get the idea than it is for most.

As part of an academic exercise, some of my students recently were assigned the task of asking Indonesian business leaders what laws they would like to see enacted in Indonesia. Predictably, the responses included new tax laws, new labour laws, and new tariffs on their competitors’ products. The one that I found most intriguing though, was the suggestion that a law be passed requiring people to obey existing laws.

I recently was part of a panel discussion that included environmental activist, economist, and former Environment Minister, Professor Emil Salim. During the discussion he pointed out that he was very proud of Indonesian environmental legislation and that environmentalists from other countries were envious of the progressive legislation Indonesia was able to boast of. He went on to say however, that as soon as the matter of compliance came up, he looked for the nearest exit.

Household garbage and street litter so thoroughly choke the rivers and canals that run through the city of Jakarta that a very promising plan to use them as transportation options looks doomed. And yet, despite there being a ream of laws regarding disposal of waste in those very waterways, there has never in the history of Jakarta been a charge, arrest, or prosecution for their violation.

A pattern is beginning to emerge.

All Indonesian cabinet ministers are required by law to disclose their wealth before, during, and after their tenure. There are deadlines set for those disclosures. That date has recently come and gone and, at this writing, only one or two ministers have actually complied with that legal obligation. Let’s not even go into the fact that the ministers who actually complied with Indonesian law had, without exception, significantly increased their wealth during their time they held their portfolios. That’s not necessarily a bad thing and anyway, it isn’t relevant to this discussion. The salient point is the general reaction to that simple refusal by the country’s leaders to comply with the country’s laws.

There are one or two muted suggestions that the recalcitrant ministers ought to be reprimanded for their refusal to obey the law, but there is no realistic likelihood that there will be much follow-up… that’s simply not the way things are done here.

That’s the taffy wall that so many people, unfamiliar with the Indonesian way of doing things, have encountered. The taffy wall is a sweet, initially pleasant, gently resilient, but ultimately impenetrable barrier that is erected by those who simply will not change their ways. It is the manner in which flat refusal is implemented without the word “no” ever being uttered or the smile ever leaving the face.

It would be far worse manners to hold someone accountable for their neglect, than the neglect was in the first place. It is more important that life continue placidly and with serenity than that any feelings are hurt by someone being held accountable.

But in Jakarta at least you will always be greeted with a smile as you walk through the decaying city, past the polluted canals, and hope you’re not killed by a motorcycle going the wrong way down a one way street past a smiling police officer.