This piece is a bit of analysis of the current news in Indonesia, specifically looking at the so-called war on corruption. As I have been many times before, I was struck by the topsy turvy logic of the situation 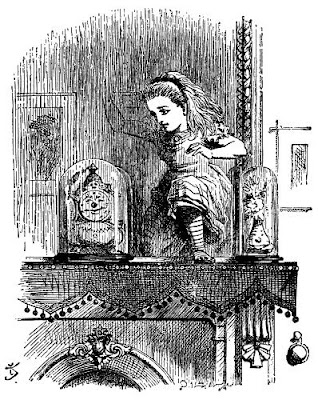 “…just as every cop is a criminal,
and all the sinners saints…”

As Indonesia prepares for the inauguration of president-elect Susilo Bambang Yudhoyono for his second term as the country’s head of state and head of government, his anti corruption efforts, rather than gaining momentum and becoming the juggernaut that is needed to reverse a culture of deep, systemic, and systematic corruption, seems to be suffering some serious, possibly fatal, reverses.

In the wildly complicated chess game that comprises Indonesia’s political system, individuals and institutions with vested interests in seeing a continuation of the characteristic access to graft and influence peddling that comes with political power seem to have reversed the tide of reform.

With the Corruption Eradication Commission (KPK), the country’s once lauded untouchable graft-busters, in disarray and the police taking up the slack, the corrupt seem to have the all-important momentum while the anti-corruption forces are fighting a rearguard action.

Antasari, once the chairman of the independent anti- corruption body (KPK) has been in detention for months now, with his trial for murder having just convened. He is accused of orchestrating a drive-by shooting of a rival for the affections of a female golf caddy and businessman Nasrudin Zulkarnaen, perhaps involved in a labyrinthine criminal case connected to the KPK. Antasari, has consistently asserted his innocence and accused other members of the KPK of “irregularities”. Only a few days into his trial and before any legal disposition of the charges against him, he has been permanently dismissed from his chairmanship of the KPK, thus weakening the moral, if not the formal structural authority of the KPK.

While the president and his staff frantically work on finding and nominating suitable appointments for Antasari’s replacement as chairman, the entrenched powers in the parties, the parliament (DPR), and even the police make every effort to impede the process, leaving the police to investigate and prosecute high-level cases of corruption in government.

EmersonYuntho of the Indonesia Corruption Watch is reported as having pointed to National Police Chief Detective, Cmr. Gen. Susno Duadji as criminalising anti-corruption activists while burying graft cases. Although the police remain close-lipped about the details of unresolved cases, the Indonesian media report dozens of major graft cases that were either dropped completely or languish without any investigatory efforts being made.

Susno initially came to national prominence when he was appointed to take over the investigation into the 2008 East Java gubernatorial election voter fraud case, a case that exposed massive and widespread abuse of the electoral system but yielded no specific suspects, although the head of the provincial polling body was directly implicated. The investigation was a direct result of complaints filed by Khofifa Indar Parawansa, the rival of the electoral victor, Soekarwo. Khofifa was nominated by Megawati Soekarnoputri`s party , the Indonesian Democratic Party of Struggle. Megawati, of course, went on to challenge unsuccessfully SBY for the presidency.

Susno`s assumption of control over the electoral fraud case was precipitated by the replacement of (National Police) Inspector General Herman Surjadi Sumawiredja by Brigadier General Anton Bachrul Alam. Brigadier Herman then promptly resigned, claiming in his letter of resignation “interference from a higher position”.

The criminal detective body (Bareskim) then went on to expand its investigation to look into allegations of fraud and graft in connection with state-owned oil company Pertamina’s purchase of Zatapi crude oil. The entire group of companies involved, including Singapore-based oil importer, PT. Gold Manor International, is known to have close ties to the Presidential Palace.

Bareskim officially named four Pertamina officials and a director of Gold Manor as suspects (comparable to filing indictments); but to say “named” is to overstate the case, since the actual names were never released, the suspects never taken into custody or detained, and the case was subsequently quietly dropped. Meanwhile, SBY, while the case was being investigated, but before it was dropped, included National Police Chief General Sutanto in the SBY-Boediono campaign team, and at the same time, the Police Chief was also named chief commissioner of Pertamina.

Anti-corruption activists are naturally concerned at what carries all the appearances of top level inside deal-making, but in the absence of any realistic possibility of unravelling and then proving the machinations that appear to be going on, they have focussed on the movement, or lack thereof ,in the criminal graft, fraud, and influence peddling under investigation by the police.

Neta S. Pane of Indonesia Corruption Watch demanded that the police clarify the status of unresolved cases for the sake of the public’s trust in the professionalism and integrity of the police.

In response, National Police Senior Commander I Ketut Untung Yoga Ana stonewalled, claiming not to know the details of each individual case, and therefore could not justify the cases that were dropped, or why the investigations in others were simply not proceeding. There was no information forthcoming, for example, as to why Susno’s investigation earlier this year into the Indover Bank scandal involving the disappearance of almost US $200 million is believed to have been dropped.

Meanwhile, the police have sent summonses to two members of Corruption Watch, Emerson Yuntho and Illian Deta Sari, naming them libel suspects and demanding their appearance for interrogation. The Indonesian police are not noted for their gentle interrogations, with some reports claiming tortured as a routine procedure by the police. The suspects, having noted some irregularities in the summonses, including the misnaming of their organisation, have said that they will not appear for interrogation, but will send a letter asking for clarification.

It seems clear, nevertheless, that the police will eventually get it right, and the Indonesian Corruption Watch officials have said that they will abide by the law, should a legal summons be issued.

The anti-corruption battle seems to have turned against the forces of reform; activists are being criminalised, the most serious corruption cases swept under the carpet. Indonesia Corruption Watch lists the following anti-graft activists as having been “criminalised” in 2009: Emerson Yuntho and Illian Deta Sari (ICW), Zamaludin (Coalition of Students and People of Tasikmalaya), Dadang Iskandar (Gunungkidul Corruption Watch), and Suryani (Glasnost Ponorogo).

With the reform-platform president SBY set for another term, but already tainted by thus far tenuous and indirect connections to some of the country’s most unpleasant financial scandals, the battle may have been seriously set back. If the scandals prove to be more closely connected to SBY than has yet been the case, his moral authority to pursue the war on corruption may be beyond repair.

The KPK, meanwhile continues, in its limited fashion, to move forward with the cases it still has under its purview, including a high-profile bribery case surrounding the election of Miranda Goeltom as deputy governor of the Bank of Indonesia in 2004.

At this point it is difficult to say whether the war is being lost or whether the current situation represents a swing of the pendulum that will ultimately be reversed and the efforts to reform will once again notch some victories.