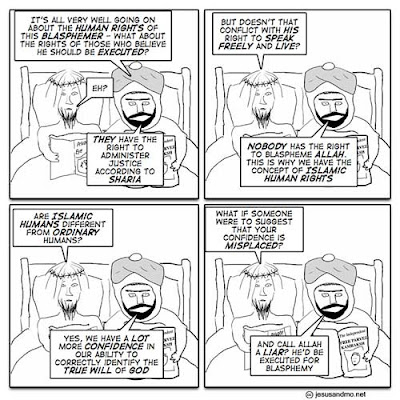 This appalling story is not going to end here…this will go on, and I predict blood will be shed. It is time that ALL religion be relegated in law to what it is in fact: a perverse delusion that should be tolerated unless it causes harm. And religious people ought to be treated like all delusional people, with pity rather than scorn until they become dangerous, and then they should be locked away for their own good and the safety of other, rational people. 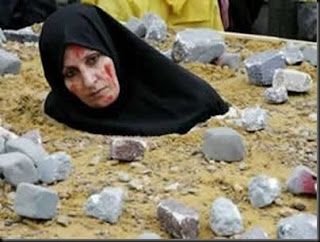 Back to the Stone Age
Patrick Guntensperger
Jakarta

The legislative council of the restive province of Aceh, at the northern tip of the island of Sumatra, has passed a series of Shariah inspired bylaws described as the provincial jinayat, or Islamic Criminal Code, bringing that province closer to the Q’uran-based caliphate sought by Indonesian terror bombers. Among the provisions of the new statute is one that calls for the public stoning of adulterers, whether they are Muslim or not.

Dominated by strict Muslims, Aceh has seen regular and frequent instances of public floggings for breaches of Islamic law. People have been publicly caned for consuming alcohol and for gambling, but the new legislation pushes the stakes even higher. Stoning to death is now enshrined in law, as is corporal punishment for homosexuality, even public displays of affection by unmarried couples, and other breaches of what the law’s proponents refer to as “ethics”.

Aceh Province, as part of the peace agreement brokered to end decades of insurgency, was given special status with even more independence than most of the rest of Indonesia’s widely scattered regions, permitting local legislators to impose criminal laws that are at variance with the National Criminal Code. Shariah law has been imposed to an increasing degree upon the residents of a province that has yet to recover from the Boxing Day Tsunami of 2004. The natural disaster, which some analysts describe as a catalyst to the ceasefire, devastated the province, wiping out virtually all infrastructure, changing the geography so that the Sumatran coastline on maps and globes needed to be re-drawn, and killing over 200 thousand people.

Since that time, the residents of the province, the vast majority of whom are devout Muslims, have seen the enforcement of Islamic law become more consistent and increasingly strict; Shariah police have, over the last few years, become more diligent at ensuring that women are not seen in public without wearing a jilbab, and arresting people caught consuming alcohol or gambling. The latest legislation ratchets these strictures up to the next level and gives legitimacy to more and stricture elements of Islamic law in a nominally pluralistic country.

Decentralisation, a basic tenet of the reform that was instituted after the fall of Soeharto, has been a contentious issue in Indonesia. While it is a systematic attempt to avoid the centralised power that characterised the erstwhile dictator’s reign, it also has demonstrated a tendency to reduce regional accountability and to create mini kingdoms in regions that have no real experience in democracy. The special status granted to Aceh takes that self determination even further.

In the rest of the country, Aceh is sufficiently independent that Jakartans consume news about the province in much the same way they would news from a foreign country. On the day the new legislation was passed by the Aceh Council, the front page stories run by the major papers were the usual mudik pictures and anecdotes. (Mudik is the local word for the annual post-Ramadan, pre-Idul Fithri exodus, as people return to their home villages, leaving Jakarta a ghost town for several days and creating traffic jams of epic proportions.) The imposition of a Shariah-based criminal code in one of the provinces was a minor item at best.

Nevertheless, the passage of the law has caught the attention of civil liberty and human rights groups. On September 15, the day some aspects of Shariah became law in Aceh, The National Commission on Violence Against Women demanded a review of the 2006 law on Aceh’s administration; the law is the framework within which local legislative bodies are given exclusive jurisdiction to impose Shariah-based ordinances in the province.

Ninik Rahayu, the commission’s deputy chairwoman said that although Aceh had been granted special status at the treaty negotiations, that status did not permit the region the authority to enforce any regulation the legislators come up with. She cut directly to the heart of the matter when she pointed out that even with Aceh’s special status, “Aceh remains a part of Indonesia, so its local regulations should not contradict higher laws,” she said at a press conference.

Of course, for the strict Muslims who support the laws, there can be no higher law than the ones they understand to be laid down by God, so the argument, also made by Rahayu, that the new regulations can be considered a breach of the Indonesian constitutional guarantee of human rights for all, is not considered valid either.

Some of the blame for the controversy, which seems poised to grow into a sectarian legal confrontation, can be laid at the feet of Jakarta. Both the Home Secretary and the Supreme Court had to sign off on the proposed legislation before the region could endorse the ordinance.

Mahfud MD, chief of The Constitutional Court, the body that would ultimately rule on the legality of the ordinances, takes the view that its hands are now tied. He notes, however that prosecutors may run afoul of the Constitutional Court when the local authorities move to prosecute offences under those ordinances, as extra marital relations, for example, are also regulated by the National Criminal Code. For now, the law is in place. 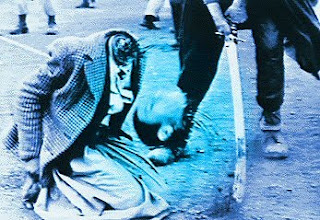 Over thirty years of sectarian violence that defied numerous attempts at negotiations, and re-erupted frequently during periodic ceasefires, drained the country’s military budget, killed thousands of Indonesians, both GAM (Free Aceh Movement) and TNI, as well as civilians, as well as taking a less tangible toll on the country. The issues of solidarity and national unity were in perpetual question, and the ultimate resolution of the conflict was of sufficient significance that the Nobel Peace Prize for either SBY or Kalla, the principal government negotiator, was a real possibility. Indonesia does not want to see the conflict resume.

As a result, there seems to be a tendency to give free rein to what some observers are calling the legitimisation of large scale human rights abuses in Aceh. This couldn’t come at a worse time, as the direction in which the Aceh hardliners seem headed is to more and more fundamentalist Islam; and this comes at a time when the country is still reeling from the effects of the resumption of what had at one time been an annual spate of bombings in Jakarta.

Jakartans, whether Muslim or not, are fully aware that the stated aims of the terrorists are to create an Islamic caliphate; an aim that seems to be being achieved incrementally in the country’s northernmost province.