Of all the politicians I’ve met, not just here in Indonesia, but anywhere in the world, I don’t think I’ve ever been as impressed with one as I was yesterday when I shared a meal with Indonesian Minister of Finance, Sri Mulyani Indrawati and members of the Jakarta Foreign Correspondents Club.

Brilliant, insightful, courageous, honest…if Sri represents a new class of politicians in this country, Indonesia has a brilliant future.

Once in a Century
Patrick Guntensperger
Jakarta

In November of 2008 when the international financial crisis was in full swing, Century Bank, a mid-sized Indonesian consumer financial institution, found itself in a liquidity crisis. Between November and December of that year, depositor lack of confidence sparked a run on the bank, prompting some Rp 5.6 trillion in withdrawal demands, and causing the bank to fail on November 21st, 2008.

Fearing that Century might be the first in a series of dominoes, the Indonesian government, under the guidance and authority of President Susilo Bambang Yudhoyono and his economics team, decided to bail out Century with a series of cash infusions from the Central Bank of Indonesia, initially intended to amount to some 700 billion Rupiah, to provide liquidity and security to the clamouring depositors. By the time the dust had settled, the federal bailout costs had ballooned to something over 6.76 trillion Rupiah (over 680 million USD).

The bailout is beginning to emerge as a political football.

By April of 2009, the country was gearing up for the national legislative elections to be held in early May, and the presidential/vice-presidential elections scheduled for July. The incumbent president was strongly favoured, largely because of his anti-corruption efforts, and as a result of his reputation for responsible economic management of the country.

Among the economic policy decisions that worked in his favour was his choice of Sri Muliani Indrawati, the tough-as-nails corruption-buster for Minister of Finance. Politically fearless, she cleaned up several stalls in the Augean Stables under her previously notoriously graft-ridden portfolio. Among the most well known for their failure to produce anything but wealth for corrupt bureaucrats, the customs and tax departments showed a palpable improvement as efficiency improved and shrinkage shrank. It seemed that each area to which she turned her attention improved under her stewardship. Forbes Magazine places her no 23 on its “world’s most powerful women” list.

Indrawati had replaced the technocratic Boediono in the Economics Ministry position he had vacated to take the reigns of the beleaguered Bank of Indonesia, the country’s central bank. BI had undergone a series of massive scandals involving graft and embezzlement at the very highest levels and the chairmanship was a hotseat. Boediono performed sufficiently impressively in that very tough position that by the time the contenders for the presidency and vice-presidency had worked out their deals and alignments, Boediono was SBY’s running mate.

The pairing was a success. That, and SBY’s economic management of the country, among other things, propelled 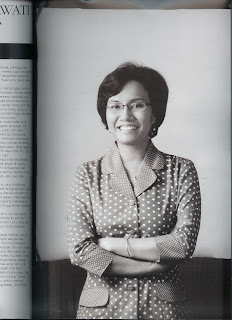 the incumbent to an overwhelming second mandate.

Before the old parliament has been dissolved or the new executive pair inaugurated, however, the Century Bank bailout has caught the attention of anti-reformists as well as SBY’s political foes, causing some real problems for SBY before his second term has officially started.

Indonesia’s contenders for the presidency have never been known for the grace with which they accept defeat, and this year’s elections have seen the results challenged in court by both losing pairs of presidential candidates and literally hundreds of legislative also-rans.

The cases were dismissed and, although election fraud is acknowledged to have taken place, the court – and common sense – determined that the outcome of at least the presidential/vice=presidential elections were not affected enough for the results to have been nullified.

Nevertheless, outgoing vice-president and last-placed presidential candidate Jusuf Kalla has flatly accused Boediono, the man elected to replace him, as having presided over “dereliction” of his duties as BI governor in the multi-billion dollar bailout.

The accusations centre around allegations that there was collusion among the bank’s major depositors including the vastly wealthy Sampoerna and Arifin Panigoro families, as well as Indonesian state-owned companies PT Jamsostek (the national insurance firm) and PT Timah (the national tin mining company). Once the government had chosen to stabilize the bank by a series of infusions of capital, these key depositors, allegedly acting on inside knowledge initiated a strategy of making massive withdrawals, while the government kept pouring funds into the bank to maintain its liquidity.

Adding further complications to the tangled story is the fact that, virtually simultaneously with the first infusions of cash, its major shareholder, Robert Tantular, was being investigated for fraud. He was arrested on November 26 and now faces eight years imprisonment; the USD 1 billion he is alleged to have embezzled has not been recovered although it is suspected that it has been spirited away to Hong Kong.

The accusations and supporting allegations have cast a shadow over SBY’s primary platform planks. Although Minister Sri Mulyani says that there was no possible way for the bank fraud to have been apparent to the central bank at the time the bailout was imposed or implemented, were it not for her formidable credentials and reputation, the defence could sound a bit pro forma, as she is well known to be a close ally of Dr. Boediono, then the BI governor and now the vice-president elect.

The anti-SBY camp’s thinking seems to be that, should the Century story run deeper or collusion be conclusively demonstrated, both the economic and the anti-corruption credentials that swept SBY to power may be seriously undermined and the process of reform in this fledgling democracy set back several years.

Sri, for her part, frankly explains that the bailout was necessary to prevent the bank from failing and from causing the financial ruin of several key players at the top of the financial and economic heap here in Indonesia. When asked at a recent foreign press corps hosted Ramadan fast-breaking if the bailout was politically motivated, she said, “Absolutely not. It was part of the government’s strategy to cope with the financial crisis.” After a brief pause she went on to say that the only politics that may have played a part in the decision was that she expected the bailout to have the side effect of generating enough political capital for the government to exercise a higher degree of care and control over the internal management of the financial institutions, institutions that have traditionally operated within their own sets of rules and devoid of any accountability.

In the post-bail out landscape she believes now exists, the government has justified its intention to manage and regulate the manner in which the banks are run and to become involved even in questions of remuneration to upper level executives, functionaries whose unconscionable compensation packages reportedly contributed to the failure of Century. She refers to this level of government intervention in the banking industry as ‘micromanagement’, but unblinkingly sees it as necessary as the result of past and current abuses. Among those abuses, she sees the corruption within Century’s management as being an example.

The outgoing Minister of Finance sees the furor as part of the political fallout that every financial crisis will see rain down on ministers in economic portfolios everywhere and seems completely open to exposing the government, and specifically her ministry’s, decision-making process to public scrutiny.

Calm, charming, and disarming Sri Mulyani Indrawati fields the inevitable questions about her future when SBY’s new cabinet is formed. Looking straight into this correspondent’s eyes, fingertips lightly on my forearm, she asks, “What possible motivation could I have to want to do that job for five more years?” Which portfolio would motivate her, then? “Education,” she says without hesitation. “Justice?” she is asked by another foreign correspondent. “Maybe justice,” she concedes.

As to her long term goals; any presidential aspirations? She laughs and replies, “Even ‘Pak Susilo asks me that. I’ll tell you the same thing I tell him.” She enunciates clearly: “I have absolutely no aspirations for the presidency.” She nibbles delicately at a date with which she is breaking her fast. “In 2014,” she says.