The following is a statement and media release from East Timor Action Network (ETAN). 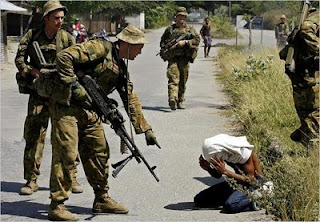 – Indicted for Crimes Against Humanity in Timor-Leste For the past ten years the disinterest of the international community and active efforts by Indonesia have blocked efforts to end impunity for serious crimes committed during the Indonesian occupation of Timor-Leste. Ignoring the pleas of the East Timorese people, the Timor-Leste leadership continues to dismiss their calls for justice and an end to impunity.

We were deeply distressed by the 30 August speech of Timor-Leste President Jose Ramos-Horta and the actions of the governments of Indonesia and Timor-Leste which led to the release of indicted militia leader Martenus Bere. His extra-judicial release violated international law and treaties and undermined the rule of law and the Constitution of Timor-Leste.

We firmly disagree with President Ramos-Horta that the pursuit of justice is “simplistic.”

We disagree that it is necessary to try everyone who committed crimes between 1974 and 1999, or to try no one. Those who gave the orders must be held accountable before a credible court. We believe the pursuit of justice and accountability for crimes against humanity and war crimes committed during the occupation of Timor-Leste will build democracy and respect for the rule of law in both countries and reconciliation between the two nations. Until there is justice, neither country can “put the past behind.” We add our voices to those in Timor-Leste and elsewhere calling for an International Tribunal for Timor-Leste.

We recognize that victims of human rights violations in Indonesia and Timor-Leste have much in common, including a desire to see those most responsible for their suffering brought to justice. We fully support the conclusions of the recently completed victims’ congress in Dili and will work on joint campaigns against impunity and for reparations.

* We urge the international community and Indonesia to respond to the recommendations included in the CAVR report released by Timor-Leste’s truth commission, including its call for an international tribunal.

* Countries should not arm or train the Indonesian military until it has been shown to be accountable for past human rights crimes.

* We urge the Indonesian government to fully implement the recommendations directed to it by the CAVR, starting with formally acknowledging receipt of its report and discussing it in the Indonesian Parliament.

* The Indonesian Government together with Timor-Leste should fully implement the recommendations of the Commission on Truth and Friendship (CTF), especially the one calling for a Commission for Disappeared Persons to gather data and provide information. Jakarta, 12 September 2009

Background
In February 2003, the UN-backed Serious Crimes Unit indicted Martenus Bere and other members of the Laksaur Militia for crimes against humanity including murder, rape, torture, enforced disappearances and more. Bere and other Laksaur Militia and Indonesian military officers are accused of carrying out the Suai Church Massacre on 6 September 1999, killing more than 30 unarmed people and three priests, including Indonesian priest Dewanto. Bere was arrested in Suai in early August by the Timor-Leste National Police. Until then, he and more than 300 others indicted by the Serious Crimes Unit lived openly in Indonesia, which has refused to cooperate with any international justice mechanism related to crimes committed in Timor-Leste. An East Timorese judge ordered him held for trial. On August 30, he was released into the custody of the Indonesian ambassador on orders of Timor-Leste Prime Minister Xanana Gusmao and Minster of Justice Lucia Lobato. Bere is believed to still be in Timor-Leste.

During President Ramos-Horta’s speech at the commemoration of the August 30 referendum, he said, “let’s put the past behind. There will be no International Tribunal.” Inexplicably, he continued that “I beg to disagree with their simplistic assertion that the absence of prosecutorial justice fosters impunity and violence.” He also said “We will not replace the Indonesians in their own fight for democracy, human rights and justice.”—-