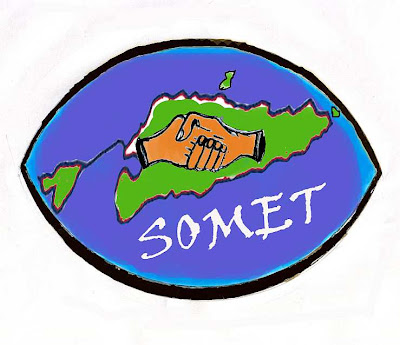 SOLIDARITY OBSERVER MISSION for EAST TIMOR
I post this as a public service and out of respect for the good work some very caring people are doing.
FOR IMMEDIATE RELEASE

August 2009 – On the 10th anniversary of Timor-Leste’s historic vote for independence, activists from five continents came together to reaffirm their solidarity with the newly independent country. Meeting in Dili, more than 200 people from solidarity groups in 18 countries discussed the continuing need for justice and accountability. In addition to ending impunity for those who committed crimes against humanity and other human rights violations during Indonesia’s illegal occupation, participants developed proposals to address current issues, including economic justice, gender justice and West Papua.

Participants in the three-day conference, “Strengthening Solidarity: The Struggle for Justice Continues,” ranged in age from 15 to 85 years. They warmly welcomed long-time supporters of Timor such as Carmel Budiardjo of TAPOL in England and James Dunn, a former Australian diplomat sent to Portuguese Timor 48 years ago. Many young Timorese enthusiastically participated, exchanging ideas with veteran activists from Timor-Leste and abroad.

Attendees both from inside and outside Timor had worked for self-determination for the occupied country. They campaigned together for a decade or more to end the quarter-century of Indonesian occupation and to enable the Timorese to determine their political destiny, which they voted for overwhelmingly on August 30, 1999. Both Timorese and international participants reaffirmed their support for Timor-Leste’s development as a new nation based on economic, legal and social justice.

Three Timorese leaders who worked with solidarity activists in exile and later rose to high government positions addressed the conference. President José Ramos-Horta graciously opened the conference, telling stories of his long association with some of the long-time activists present. Mari Alkatiri, Secretary-General of FRETILIN and former Prime Minister, said that “if we don’t continue to talk about justice, we shouldn’t have thought we could rule ourselves.” Agio Pereira, Secretary-State for Council of Ministers, closed the conference.

Participants enthusiastically endorsed self-determination for West Papua and Western Sahara and ending military rule in Burma and human rights violations in Sri Lanka. They also clearly linked the struggle for justice for Timor-Leste with that for democracy and human rights in Indonesia. Participants felt strongly that others should benefit from the international solidarity extended to Timor-Leste over the decades.

Solidarity activists from Indonesia and Ireland, and two Timorese women, one who worked with the solidarity movement from inside the country and another from Australia, shared their experiences and analysis of their activist campaigns that led up to the referendum. People involved in unfinished human rights and self-determination struggles for Burma, Sri Lanka, Western Sahara and West Papua urged participants to extend their solidarity. Speakers on the second day detailed the consequences of impunity, as well as obstacles to and mechanisms for achieving justice for crimes committed during the brutal Indonesian occupation of Timor-Leste.

Workshops then discussed future solidarity actions on several topics. The justice group reaffirmed the need to end the culture of impunity through the creation of an international tribunal and urged more coordination of international and local campaigns for justice. They called for greater dissemination of Chega!, the report of the Timor-Leste truth and reconciliation commission (CAVR). The group on economic justice called for people-centered development that benefits all Timorese citizens, as well as greater transparency and accountability from government. The gender justice workshop called for improving the judicial system to better support victims of conflicts over the years. The People-to-people/religious solidarity group encouraged religious denominations to get more involved in working for justice and accountability and to provide more information about human rights issues. The Solidarity with West Papua group strongly supported self-determination for the Indonesian-controlled territory.

The conference called on Timor-Leste’s National Parliament to debate the CAVR and the joint Commission on Truth and Friendship (CTF) recommendations. We urge the Timor-Leste government to implement the CAVR recommendations. Governments of other nations must also implement the CAVR recommendations that are addressed to them. The Timorese government and parliament must attend to the victims of the occupation and intra-Timorese violence, and the UN must establish the solidarity fund to support victims of the occupation. The conference urged cooperation in resolving the cases of stolen children, and investigation into the question of people disappeared. The problem of the East Timorese “refugees” in Indonesia must also not be forgotten; their living condition is growing from bad to worse.

Attendees plan to amplify the voices of the victims of war, violence and occupation and push responsible governments to improve the living conditions of victims. We need to improve data collection on victims (including victims of sexual violence); NGOs need to consolidate the data they have collected (on present and past victims), and use that data to end the cycle of violence.

The conference demanded an end to impunity for the perpetrators of the killings of Papuan political leaders and human rights activists, including Arnold Ap, Opinus Tabuni, Theys Eluay and his driver Aristoteles Masoka,. The participants urged a peaceful dialogue between the government of Indonesia and representatives of the people of Papua. They urged the government of Indonesia to conduct a comprehensive evaluation of the implementation of “Special Autonomy” in West Papua and open its results to public. The conference urged international agencies and governments who support “Special Autonomy” to evaluate and review that support. They also demanded the release of all West Papuan political prisoners wherever they are, including those detained by Indonesian Regional Police of West Papua in Jayapura.

The conference condemned the recent attack by Morocco on Sarawi activists and human rights defenders in Tan Tan, Morocco. The participants extended their solidarity for the implementation of the peace agreement in Aceh, and for the peaceful resolution of the conflict in Mindanao.

Funding was provided by CAFOD, Catholic Relief Services, Caritas Australia, Caritas Aotearoa (New Zealand), Development and Peace, HIVOS, Progressio, and Trocaire. The conference is part of a series of activities including an exhibition illustrating global solidarity activities over the years now open at Fundação Oriente, Dili, through 5 September. Visiting activists from overseas and Timorese students visited rural communities in Maubisse and Ermera to expand their understanding of people’s daily lives and how they are cooperating for mutual benefit.

ETAN looks forward to your support. Go to http://etan.org/etan/donate.htm to donate. Thank you.