This one speaks for itself…. 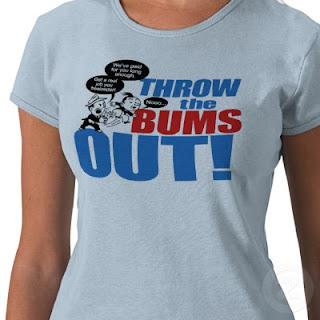 Time to clean house at the KPU
Patrick Guntensperger

Now that SBY’s election has been confirmed and all legal challenges to the results have been dismissed, it’s time to make a clear statement of Indonesia’s commitment to democracy and to the government’s accountability. The KPU must be completely overhauled, with every significant member of the staff dismissed for incompetence, and replaced; starting at the very top.

The president can making sweeping changes by decree, or, even better, in concert with DPR he can create appropriate legislation. Such a move would signal the country’s dissatisfaction with the KPU’s mismanagement of the national elections. It would send the message that senior government positions carry more than perks and prestige; they demand responsibility, competence, and accountability. It would broadcast the notion that inadequate performance is no longer acceptable in Indonesia. Moreover, it would pave the way for less rancorous future elections.

It is fortunate that the SBY-Boediono ticket was so convincingly the people’s choice; had the election been a close-fought race, the legal challenge to the results that was launched by the second and third place candidates may have been successful. Had the results been close, the evidence of a large number of fraudulent ballots might have been enough to shift the victory to another camp, and a revote could have been required. As it happened, SBY-Boediono had a strong enough lead that, although there certainly was widespread electoral fraud, the numbers simply don’t support an argument that anyone but the incumbent and his running mate had a legitimate mandate from the people.

And it’s just as well. A young democracy like Indonesia’s is fragile; there are many people who are not completely convinced that real democracy is an improvement over the dictatorships or “guided democracies” of the past. If the democratic process leads to instability, if mandates are not certain, if a leader is widely believed to have assumed power fraudulently, there is every chance that catastrophic government failure could result. Had not SBY-Boediono so clearly been the people’s choice, those conditions could have prevailed.

The KPU, in its current incarnation and with its current members and staff is far more than one more inept, incompetent, unaccountable government agency. It is actually a threat to the progress of democracy in Indonesia.

Any future election organized and managed by the existing KPU could produce a dangerous level of instability, if the candidates are more closely matched in popularity. The incompetence and negligence of the current KPU could very well produce conditions that cause Indonesia’s fragile democracy to falter and even fail.

SBY’s reluctance to embarrass others is well known; it is also a liability. His hypersensitivity to the reputation, image, and feelings of others has caused him in the past to hesitate to do what is necessary. That the KPU has to be eviscerated and rebuilt is obvious to everyone in the country and to all outside observers; to hesitate to do what is necessary will not spare anyone’s feelings. Indeed, delay at this point will only serve to consolidate SBY’s reputation for indecisiveness, and will send a message that incompetence is an acceptable standard in the new Indonesia.

Susilo and the DPR, working together, need to take immediate, radical steps toward a comprehensive restructuring of the KPU, toss out the current leadership without a golden parachute, and rebuild it with checks, balances and built-in accountability and standards. To do that would be the best possible way of communicating the news that there’s a new sheriff in town and things are gonna be different.If the DPR, as it is wont to do, chooses to obstruct the process, or dithers in its deliberations, the president ought to underscore the seriousness of the KPU’s failure and the danger of its continued existence by issuing a decree in lieu of law and getting on with the job until the DPR does theirs. At the moment the ball is squarely SBY’s court.

His opponents have shot their bolt and their kvetching about the elections already smacks of sour grapes; they are in no position morally or politically to take on the KPU. Any further assault on the electoral process, deserved though it, is will lack credibility.

As much as we would hope that government officials entrusted with high levels of trust by their country would show some accountability and responsibility, very little has been shown by the officials at the KPU. With the massive domestic and international outcry about the KPU’s near total ineptness at carrying out its duties, one would have expected the commission’s chief, Abdul Hafiz Anshary, to have offered his resignation. Anshary, however has said that he feels no obligation to do so, saying that he believes the KPU did its best.

What Anshary fails to grasp is that, if indeed the KPU did its best, that’s the best possible argument for replacing the people who run it. It amounts to an admission that there is no hope for improvement with the current incompetents at the helm, and further suggests that total incompetence is an acceptable standard for Indonesia.

Indonesia deserves better, and it’s time her president acknowledged that.