I’m posting this one because I’m currently helping some students develop techniques for writing profiles of newsworthy people. This is one I wrote a little while back for The Jakarta Globe about a man I admired and then got to like very much as a person; getting to know nice people is a bonus that comes with being a journalist. 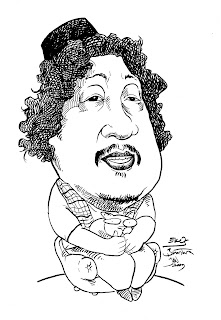 Didi Petet, when he’s out in public, does not draw hordes of fans soliciting autographs. People recognize him all right; his face is part of Indonesia’s iconography. But people seem inclined to treat him as a regular guy. They nod when they catch his eye and surreptitiously point and whisper when they spot him at a cafe table.

Recently, over a bowl of es campur, an iced mixed fruit dessert, Didi spoke of his career, his roles on both the big and small screens, and his pet peeves — one of which is when he’s described as a comedian. He’s not a comedian, he insists, nor is he a comic; he’s not even entirely comfortable with being described as a comedic actor. He wants to make it clear: He is an actor. Period. 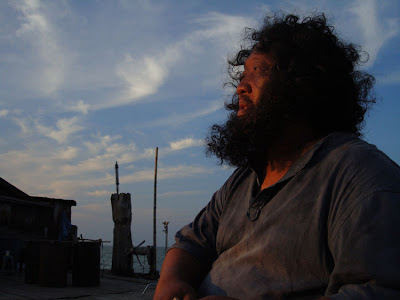 In the film “Jermal,” which premiered on Thursday, Didi plays Johar — the reclusive, brutal fishing station manager with a haunting dark past. He depicts the character brilliantly, proving his acting is no laughing matter.

Born in 1956 in Surabaya and brought up in Bandung, Didi Widiamotko almost missed out on becoming Didi Petet, actor. His family instead saw a bright future for him in a technical or professional field after he graduated with good grades from his high school in Bandung. It was with high hopes that they watched him enter the doors of the prestigious Bandung Institute of Technology. It was with fear and loathing that he instantly fled. The briefest of glimpses told him that he wasn’t cut out for that kind of life. A scholastic career at the university would have been boring, he says.

Instead, Didi enrolled in the Jakarta School of the Arts in 1977 to study acting, and there he met Harry Roesli, a progressive rock icon and a music teacher. Harry took the young Didi under his wing, putting him on stage in both student and commercial productions of everything, from musicals to operas, to showcase his untrained but rapidly developing vocal skills.

Didi said that from the moment he stepped on to a stage, “I knew I was at home. For some reason, I had a relationship with the audience whenever I walked on stage. I knew I could touch them.”

He was so taken with the profession that he chose to take every class he could and even slept at the school, with the boards of the stage as his bed.

“My brother lived here in Jakarta, but I never stayed with him…I slept at the school, on the stage. I never wanted to miss a moment of what I was learning. I studied physical movement, technique, the classics, but most of all, I studied voice. I could have been a singer, I suppose.”

After he graduated in 1982, it did not take Didi long to become a nationally recognized actor.

Although many filmographies list “Catatan Si Boy” as his first appearance in a feature film, it was actually in “Semua Gara Gara Gina” that Didi made his feature debut, playing a small role. Nevertheless, “Catatan Si Boy” — a slapstick comedy about the misadventures of a group of teens growing up in Jakarta — was a phenomenal success and launched his career.

In fact, his character “Emon” was such a popular success that sequel after sequel was made with Didi mincing his way through the films; eventually, they were more about the sidekick than the central figure. In 1991, he made two more films in the series.Didi says, though, he never saw the character Emon as gay.

“I think everyone assuming that Emon is homosexual is one of the funniest things in the movies. It is a joke, the way people jump to conclusions about people.”

In 1994, Didi introduced us to another iconic character, Kebayaran. “Si Kebayan Mencari Jodoh” told the story of a lovable Sundanese layabout who etched a permanent place in the hearts of Indonesians. Both Emon and Kebayan are Indonesian icons — the two characters are as identifiable with Didi as Rocky and Rambo are with Sylvester Stallone.

He has played a variety of similar characters in more than 20 films since the first “Boy” pictures. Didi has also found himself flogging everything from Yamaha motorcycles to a patent medicine called Puyir 16 Bintang 7 in humorous TV commercials.

With this film and career biography, the serious role of Johar in “Jermal” may seem to be a stretch. But Didi’s performance has helped the film garner high praise at its festival screenings in South Korea, the Netherlands and Italy.

The film spans about three months, depicting the lives of laborers on one of Indonesia’s many jermal , which are wooden fishing platforms that dot the waters off Indonesia’s coastlines. The story begins with Jaya, who is sent to the jermal after his mother’s death to work with his father among a veteran crew of mostly illiterate teenagers.

Jaya, played by Iqbal Manurung, is a soft, thoughtful 12-year-old, unprepared for his new life. Johar is the manager of the facility and surprised to find he is Jaya’s father. The story explores the developing relationship with Johar, who is hiding out on the jermal to escape problems back home.

Was Didi nervous about playing such a serious role?

“Nervous?” he chuckles. “I’m an actor. Comedy is just one of the tools of the trade. I have many tools in my toolbox. I loved the character and I loved the challenge of playing him.”