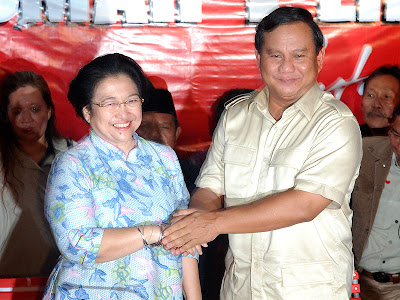 Indonesia’s is a culture that prizes decorum and the appearance of serenity. It has been remarked that, in Indonesia, public propriety is seen as more fundamental than private perfidy; appearances are more important than any reality. Indonesia, being what sociologists call a “high context” society, pays more attention to the manner in which a message is delivered than the actual contents of the message.

That these are observable phenomena makes it even more baffling that many of our politicians seem to have such a hard time behaving with grace and dignity, even, or perhaps especially, in the public sphere. Perhaps the most obvious, but far from the only example of immaturity and bitterness in Indonesian politics is the reaction of Megawati Soekarnoputri to her defeat at the presidential polls.

Megawati embarrassed herself and her country with her childish behaviour throughout SBY’s first mandate. So infuriated was she by her former cabinet minister’s having challenged her for the country’s leadership, that, after he moved into the presidential palace, she petulantly boycotted any of the new president’s public appearances. Andi Mallarangeng, SBY’s spokesperson on domestic issues told me that ensuring that the President and Megawati never appeared in the same place at the same time was a significant job for presidential aides and a fulltime occupation for at least one of Megawati’s handlers.

Megawati made it clear to the people of Indonesia and the world that she feels that the keys to the kingdom rightfully belong to her by divine right, or hereditary entitlement. Megawati seems never to have grasped that, although she was once the country’s president and she continues to feel a sense of entitlement as a result of her familial relationship to Indonesia’s first home-grown dictator, the truth is that she was never once elected to public office. Every time she offered herself to the people of Indonesia as a candidate, the people rejected her and opted for someone else. It obviously rankles that both of her presidential attempts were defeated by the same opponent, SBY.

This time around she is trying to play both sides of the fence.

On the one hand, she and her running mate, Prabowo, decided that rather than concede defeat in the interests of the nation, they would launch a potentially divisive legal action challenging the results of the election. There is no doubt that the KPU was staggeringly incompetent and the elections were a shambles; that much is clear. Nevertheless, for her challenge to have prevailed she would have had to satisfy the court that literally millions of ballots were systematically falsified in a way that took those votes away from her and recast them for SBY. The challenge could not possibly rise to that level, and was accordingly dismissed.

On the other hand, her PDI-P party is still trying to decide whether to play the role of a parliamentary opposition or else to cozy up to the Partai Demokrat and form a coalition. It seems that her principles, policies, and platforms are completely flexible, as long as power is attained.

So Megawati, who stridently denounced any and all policies of the Demokrats, now sees a possibility of embracing them. She, who accused the Demokrats of having usurped her rightful position as head of state by rigging a national election, now considers the Demokrats suitable candidates with whom to partner, as long as she and her team get a piece of the action.

It is a little pathetic that someone who should command respect and admiration from the people of this country found herself unable to behave with dignity and grace when it would have been in the best interests of the nation. Instead she opted for a rancorous, divisive, and hopelessly doomed legal challenge out of spite and bitterness.

But when the heady scent of potential power wafts under her nostrils, she is prepared to make nice to her most hated rival, and even abandon any political convictions and principles she might have had, all in an effort to grasp a few shreds of influence in the country that has twice rejected her.

When we see a politician whose expressed ideals are used merely as means to acquiring power, it is reasonable to suggest that the politician has not fully grasped the principles of democracy. When those expressed principles and ideals are the ends themselves, on the other hand, it’s fair to say that we’re dealing with a more mature understanding of the democratic process. Old-school Indonesian politicians, of which Megawati is only one example, still demonstrate a single-minded fixation on attaining power, and very flexible sets of principles.

Now that SBY has been officially confirmed as the winner and has a solid second mandate, it is possible that a new generation of potential political leaders will emerge in Indonesia. As the old-school politicos become increasingly irrelevant, there might be room for young, genuinely democratic, idealistic, and public service-minded Indonesians. Five years from now the people of this archipelago may be fortunate enough to have to select among a variety of visions of Indonesia, visions held by candidates who actually believe in them.

As Indonesian democracy matures, the political players will mature; politics will be increasingly be about substance over appearance.