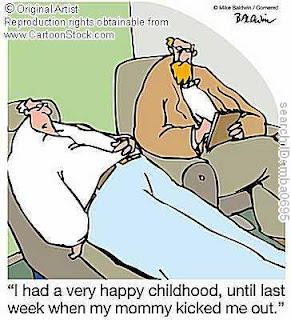 I wrote this essay recently after having had a particularly irritating experience at one of the universities at which I lecture. I had been trying to give a tutorial to two very bright and enthusiastic students in a room that happened to be across from a student common room where a group of college aged students were playing ping pong.
I had to stop the class on five separate occasions to ask the players to tone down their screaming as it was making my tutorial impossible. The screaming was not the occasional shout of victory or defeat, but rather a sustained blood curdling, earsplitting shrieking; behaviour that would not be tolerated even at a political riot. On the fifth time, I finally threw them all out of the room and had the door locked for the remainder of the day.
Naturally, the spoiled, overindulged children in adult bodies were dumbfounded that their play could be interrupted; it had never happened before. They even complained that they had a right to play their games.

That their boorish behaviour, even in the face of four requests to moderate it, had a serious negative impact upon others was just not part of their worldview. It made absolutely not one shred of difference to them that they were disturbing others and interfering with their education. Their personal pleasures were all that counted.

The incident crystalised some thoughts I had entertained for a long time regarding child raising practices here and elsewhere. As a new parent, I’m interested in hearing any input you might have.
University students in Indonesia
Patrick Guntensperger

Indonesian child-rearing methods, which at first glance appear nurturing, supportive, and positive, have had a profoundly negative impact upon the character and chances for the future development of the generation of Indonesians just reaching physical maturity.

In the Indonesian culture, children are treated with a reverence bordering on worship. They are pampered, coddled, and spared any discomfort that can be avoided. Many children have never spent a single instant alone since birth, sleeping with their parents, and later with siblings or other family members. It is customary never to say ‘no’ to a child. In many cases, children are literally spoon-fed by parents or servants until they are in school and, in some cases, long after they have started to attend school regularly.

Children as old as eight or more are routinely carried in the arms of parents or servants; sometimes the child is as big as the nanny doing the carrying. Children remain dependent upon and even unnaturally attached to their parents until adulthood and beyond. The result is that adolescents in Indonesia are far less independent than their counterparts in the rest of the world and tend to display characteristics normally associated with very young children.

Among those characteristics is a tendency to behave as though they are the center of the universe. Far more than elsewhere, in Indonesia, young people act with utter indifference to others. Never having been refused anything, many of Indonesia’s young people carry a sense of entitlement that children in other cultures begin to outgrow in the early stages of socialisation.

All of this is exacerbated by other cultural realities. First time visitors to Indonesia are often astonished at the lack of respect for regulations and laws. No smoking signs, traffic laws, safety regulations of all sorts are routinely disregarded if found to be inconvenient. The disinclination to queue up for anything, the mob behaviour at buffet tables, the charging into elevators without giving others the chance to disembark,; all of these discourtesies are manifestations of a cultural disregard for others’ convenience, comfort, or rights. The constant barrage of noise, the talking out loud and on cell phones in movie theatres, the habitual shouting across rooms, and the lack of consideration for others is simply a result of the self absorption engendered by Indonesian early childhood conditioning.

That behaviour, socially unacceptable elsewhere, is tolerated, even encouraged, in Indonesia. Thus society’s acceptance of boorishness reinforces the egocentricity and neglect of consideration for others.

By the time young Indonesians reach university age, so entrenched are the habits learned from infancy, that, in all too many cases, effort, earned achievement, or working toward a goal are utterly alien concepts. As they have never done anything for themselves, they expect never to have to do anything at all; effort and work is what servants are for. And entertainment and amusement is what university is for.

Since nothing has ever been expected of them, these child-adults have no sense of accountability and they work from the presupposition that their comfort, their amusement, is paramount; moreover, it is up to the rest of the world to provide it.

Certainly these character traits are not universal within Indonesia, nor are they unique to the country; they can be found occasionally elsewhere, and many young Indonesians have astonishingly clear value systems and strength of character. But while there are certainly exceptions to these observations, these generalisations are observable tendencies to anyone who deals with youthful Indonesians on a regular basis. And while instances of these behaviours and traits can be seen all over, they are endemic here.

What university teacher in Indonesia hasn’t had the experience of a student, or a whole class expecting to be given an extension on an essay or even an opportunity to write a missed final exam because the student felt ‘too tired’ to do the work or to show up on time? Or at all? To people with no familiarity whatsoever with the concept of accountability, any reason is sufficient justification for failure to perform. ‘I didn’t feel like it’ is as good as ‘I was unable to attend because of a violent insurrection in the streets’.

These tendencies on the part of Indonesian students can be attributed to the manner in which they are raised. While babies certainly must be loved and protected and indulged, those same babies need to be socialised to recognise the existence of others. As they pass the toddler stage, they cannot be taught that their every whim must always be fulfilled, even at the expense of others’ rights. Children from the earliest age need to recognise that they share this world with others and that those others have the same rights they have. Children need to be guided into an adulthood in which ideas like integrity, accountability, and independence are seen as precious resources rather than bad habits.

Never having to try, never having responsibility, always being indulged are certain recipes for ensuring that our young generation remains socially and ethically retarded by world standards. We are not doing our children any favours by burdening them with a sense of superiority, arrogance, and indolence; virtually guaranteed results of the upbringing practiced in far too many homes.