This piece is a round up of Indonesian news with some analysis. Although it carries my byline, much was contributed by Shawn Crispin, Asia Times Online’s very thorough and professional Southeast Asia editor 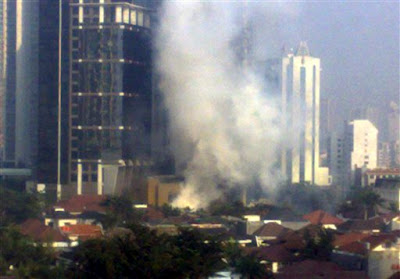 – As the dust settles on last month’s terrorist bombings, new political rumbles threaten to complicate a smooth transition of power after the July re-election of Susilo Bambang Yudhoyono to a second five-year term as president. Official results showed Yudhoyono, popularly known as “SBY”, won 60.8% of the vote, widely outpacing runner up Megawati Sukarnoputri, who earned only 26.8%.

Megawati and the third-placed Jusuf Kalla, who received 12.4% of the votes, have joined forces to file a legal challenge to the validity of the July 8 presidential polls. Megawati is demanding either a new vote or a two candidate run-off against Yudhoyono, which would have been legally required if he had received less than 50% of the vote.

Megawati’s legal team allegedly has evidence of 28.5 million fraudulent votes, including duplicated names, the registering of dead people and infant children and other irregularities. If all of the alleged bad votes were subtracted from Yudhoyono’s count, the team claims he would have only won 48%, requiring a second round run-off against the second-placing candidate Megawati with Kalla’s votes in the first round up for grabs.

Megawati’s challenge, political analysts say, is not without merit. Whether the evidence of voter fraud her team presents is sufficient for the Supreme Court to invalidate the election and call new polls, however, for now seems doubtful. The General Elections Committee (KPU), the official body that oversees and runs elections, has taken heavy fire for its perceived poor performance in both the presidential and national legislative elections that were held in April and apparently handily won by Yudhoyono’s Democratic Party.

At the legislative elections, which 34 different parties contested, there were clear indications of massive and widespread voter fraud. While there were bound to be logistical blunders in holding one-day elections for a population of almost a quarter billion people spread across 17,000 islands and with infrastructure varying from poor to non-existent, the voters list fiasco was seen as a systematic attempt to tilt the election result.

The Supreme Court has ordered the KPU to recount the legislative election votes and as a result seat allocations in the People’s Representative Council, or DPR, have yet to be officially finalized – although the KPU has said the allocations will stand whatever the ruling or recount results. The KPU has put the second phase of legislative vote-counting on hold while it deals with the new legal challenges to the validity of the presidential election. The Supreme Court will determine whether the evidence rises to the level required to invalidate the results, which at this point, analysts say, seems unlikely.

Under assault
So far the legal challenge has been orderly, but there is an undercurrent of tension which was intensified by the suicide bombings last moth of J W Marriott and Ritz Carlton hotels in Jakarta that killed nine people and maimed many more. There was initially open speculation – some of it fueled by Yudhoyono’s cryptic speech in the wake of the blasts – that the bombs could have been politically motivated to take the steam out of Yudhoyono’s landslide win.

Now the hunt is on for fugitive terrorist Noordin Top and most analysts say there is little question that regional terror group Jemaah Islamiyah – or one of its newly spawned offshoots – rather than Yudhoyono’s political opponents was behind the terrorist attack. Security analysts note that the grade of explosives and tactics used in the blasts indicated a terrorist rather than military mastermind.

Yudhoyono’s policies, including a highly touted anti-corruption campaign which is believed to have won him many votes, are more clearly under assault in the DPR, where his Democrats have marginal influence until the new legislature is seated. The DPR has dragged its feet on debating a bill that would allow the specially designated Anti-Corruption Court (ACC) to retain its exclusive jurisdiction over cases brought by the semi-autonomous Corruption Eradication Commission (KPK).

The ACC has a 100% conviction rate and has routinely imposed lengthy prison terms to even politically powerful convicts. Without the bill’s passage, the special court will lose its authority by year’s end, a move that would greatly undermine the KPU’s ability to successfully prosecute cases.

The district courts, high courts and Supreme Court, which will handle corruption cases if the DPR succeeds in closing the ACC, have comparatively heard 222 corruption cases not filed by the KPK in 2009. Of those, more than 150 defendants were freed without charge, while those found guilty have been sentenced to an average of only six months in prison, according to statistics compiled by Indonesia Corruption Watch, an independent monitoring group.

Many political onlookers believed that Yudhoyono’s Democrat party win at the legislative elections and his resounding victory at the July 8 presidential polls heralded a new era of political stability and good governance in Indonesia. Analysts noted that the stock market rose even in the wake of the terrorist bombings and there was still a general sense of optimism about the country’s democratic future even in the wake of the blasts. But less than one month later, with the legal challenges to the elections’ legitimacy, the political situation is once again unsettled.

Some political observers see Megawati’s challenge as her political last gasp after convincingly losing two consecutive presidential elections. She was known to be personally bitter after being trounced at the 2004 presidential polls by her former cabinet minister turned electoral opponent Yudhoyono. That deep-seated resentment was known to have carried over to the recent campaign trail, seen visibly when Megawati declined to shake hands with Yudhoyono but grasped Kalla’s during a nationally televised debate.

The electoral loss has left formerly powerful political figures in limbo. Kalla has said that he will retire to his Sulawesi home, although his Golkar party, the political machine behind former dictator Suharto’s regime, has said that he will be given a “significant position” within its ranks. Meanwhile Megawati has failed to capture voters’ imagination as democracy has deepened, and it is notable that the former president has only been appointed and never elected directly to any office by the Indonesian people.

If Megawati’s and Kalla’s complaint is handled through legal channels and the rulings of an independent investigation are honored by both sides, then Indonesia’s young democracy will have passed another important test. But there still remains the potential for a volatile backlash if electoral fraud is found to have been both systematic and widespread, as the two election losers have alleged.