The issue of the routine maltreatment of domestic workers is becoming a frequent source of news. This gets particularly vociferous play when the maltreatment occurs to an Indonesian migrant worker living in Malaysia. But the truth is that abuse of domestic workers is endemic and occcurs here in Indonesia as well. The following is a press release from an organisation that deals with those issues. 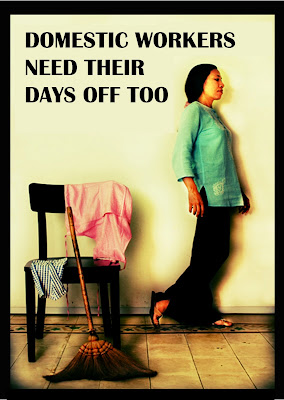 CARAM Asia is an NGO in Special Consultative Status with the Economic and Social Council of the United Nations. It is an open network of 29 NGOs and CBOs working in 17 countries. The CARAM Asia network is involved in action research, advocacy, coalition building and capacity building with the aim of creating an enabling environment to empower migrants and their communities to reduce all vulnerabilities including HIV and enhance their health rights globally.

Lack of Political Will Compromises Rights of Domestic Workers

As the governments of Indonesia and Malaysia prepare to meet in order to review the existing Memorandum of Understanding (MOU) on foreign domestic workers (FDW), CARAM Asia alongside its members in the two countries, Solidaritas Perempuan and Tenaganita, calls on both governments to cement changes into legally binding legislation. Such moves would implement long over due measures to recognise domestic work as work, providing FDWs with the same rights as any other worker, including a weekly paid day off.

Despite an MOU being signed between the two countries in 2006, the past three years has demonstrated that such a mechanism has failed to provide FDWs with adequate protection from exploitation or abuse. Instead, the central tenant of the MOU continues to place the onus on productivity while neglecting any enforcement mechanisms to monitor the conditions of the workers themselves. This subsequently places the terms of employment and set of responsibilities under the direction of the employer which creates a climate prone to both abuse and exploitation. The lack of a legally enforceable contract has now meant that a large number of FDWs now work as much as 16 hours a day, seven days a week.

Thus, while the MOU claims to incorporate the need of workers to have adequate time off, the overall lack of enforcement means that the majority of FDWs are not able to have time outside of the employment sphere in order to recuperate. Furthermore, the mobility of the FDW is also impeded by the fact that in violation the Passport Act, many employers retain the employee’s personal documents for fear that they may abscond. This can be extremely damaging for the FDW as it potentially limits their ability to access health services or report criminal abuse, thus trapping the FDW in a sphere of conflict.

Therefore, under the existing terms of the MOU, FDWs continue to be denied a legally binding employment contract that would regulate the job scope and hours expected of the workers. Furthermore, any conditions laid out in the existing MOU remain largely impractical as the agreement is subservient to the national law of each country. As such, the Employment Act 1955 within Malaysian law denotes that domestic workers are merely recognised as ‘servants’ and this therefore means that they are deprived of the same rights as other worker. These include such basic rights as access to employment tribunals and contract termination benefits.

CARAM Asia notes that a further issue of concern is that governments have rarely sought to monitor the role of labour recruitment agencies, many of which operate unregistered by the official channels. Furthermore, the increasing number of agencies has resulted in a situation where the supply outweighs the demand and many migrants find themselves unable to find work but left with heavy debt.

We further remind the two governments that such a move would meet with their existing commitments to uphold human rights protections under both the Convention on the Elimination of all forms of Discrimination Against Women (CEDAW) and the Convention on the Rights of the Child (CRC). Both governments must therefore ensure the rights stipulated in these conventions are transferred into national law with subsequent monitoring and enforcement.

As such the Malaysian government must immediately amend the Employment Act ensuring comprehensive labour protection to all FDW within their border with the inclusion of a standard contract in the law. Only when this contract is incorporated into the Employment Act law can the rights of FDW be guaranteed.

We agree in principle with the Indonesian government’s request for domestic workers to be given a weekly day off, allowed to hold onto their own passports, paid wages promptly and assured of health and security protection.

In addition to what the Indonesian government has demanded, CARAM Asia calls upon both governments to;

(1) Clearly define the job scope of the domestic worker within the employment contract.

(2) Fix a maximum number of working hours expected of the FDW as well as the inclusion of a weekly paid day off not negotiable with compensatory wages.

(3) Reduce the placement fees by both Malaysian and Indonesian agents and enforce mechanisms to monitor agents who do not comply with the stipulated amount. The Indonesian government must review the role of agencies at all levels and control the cost of workers. While the Malaysian government must ensure fees that are already paid by employers are not charged again to the worker.

The Malaysian Government
(4) Fully amend the Employment Act to recognise domestic workers as workers instead of servants in order to provide them with the same rights and protections accommodated to any other workers.

(5) To prosecute employers and agents who hold on to the passports of the workers in accordance with the Passport Act. Passports or any other personal documents should not be kept for safekeeping by any other person.

The Indonesian Government
(6) Manage the training of domestic workers to equip them with both occupational skills and knowledge on their rights and ways to seek legal redress. Since the Indonesian migrant workers contribute to nation building through their earned remittances, the government must shoulder the training costs for them.

More information on Caram Asia may be found at: http://www.caramasia.org/