We in Indonesia have recently seen a number of the wealthy and powerful using the country’s criminal court system to support the corporate agenda, to stifle complaints about shoddy business practices, and to hobble freedom of expression.

This was written to address the most recent case that made the news. In this case it’s a poor billion dollar corporation that is claiming it was victimised by a couple of small kiosk operators who complained that they had been misled by the mega-corporation. These corporate whiners just reached out and slapped the small business owners into submission. Babies. 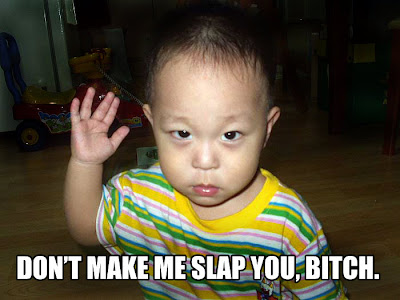 In yet another assault on the fundamental rights of all Indonesians, the judges in East Jakarta Criminal Court have found a group of small businessmen guilty of defamation. Although the justices only handed down a sentence of a year’s probation, the trial was a criminal prosecution, carrying the risk to the defendants of imprisonment.

The charges were laid because the defendants had complained that their landlord, giant property developer, PT Duta Pertiwa Tbk, a subsidiary of the Sinar Mas Group, developer of the ITC Mangga Dua shopping complex where their kiosks are located, had misled them. Specifically, they wrote a letter to the editor of local newspapers, urging others to “be careful when purchasing PT Duta Pertiwa properties!”

It seems that the property developer had sold the defendants the rights to the land upon which their kiosks were built, and the owners only found out after 16 years of running their businesses that, in fact, the developer didn’t have those rights to sell. The defendants allege that they paid a premium price for their land titles only to discover that the rights associated with those titles were not what the developer had claimed.

It is astonishing that, in a democracy, making such a complaint could result in criminal charges. It is even more astonishing that the prosecutor’s office would pursue the case, and nothing short of ridiculous that the court would return a guilty verdict.

Disregarding for a moment the fact that warning potential purchasers to be careful when buying something from anybody can be hardly be classified as “defamation” – it’s just good advice at all times – the inclination to stifle any public airing of grievances is worrisome to anyone who cares about democracy. For stifling discussion and public expression is exactly the purpose of the prosecution.

The Indonesian Criminal Code (KUHP), under which the defamation laws fall, clearly states that the charges must be brought by the victim; the state doesn’t have the authority to prosecute defamation charges unless and until the party alleging injury files a criminal grievance. At that point the state takes over and, if the prosecutor’s office believes that the law has been broken and the claimant has been defamed, the matter proceeds to trial.

That means that the state acts as advocate for the alleged victim. In this case, the victim is the giant property developer who has the full force of the country’s prosecutorial power working for its rights, while the small kiosk owners must use their own resources to hire legal counsel to fight the charges. Win or lose, the small kiosk owners will bear the burden of legal costs while the developer has the state pay for its prosecution. Moreover, it’s an open secret that decisions at the district court level traditionally tend to favour the wealthier parties before the bench.

That such a dynamic was at work in this case is suggested by the observation that while the prosecution was permitted to trot out any witnesses it wanted, the defendants were not permitted similar latitude. This restriction of witness testimony prevented the kiosk owners from mounting a defence on grounds that constitute an exception to the defamation laws – that the statements in question were the truth. That defamatory statements are true is supposed to be an absolute defence. However, the honourable justices wouldn’t hear testimony to support the kiosk owners’ claim that they were misled by the “victim”. They brushed the allegation aside, saying that the kiosk owner had attended a meeting at which, presumably, the rights in question were mentioned.

Although the decision will be appealed, and there is some possibility that the decision will be reversed, it is becoming clear that the courts are complicit with corporations and other well-heeled complainants in what amounts to SLAPP suits. The acronym stands for Strategic Litigation Against Public Participation, and refers to the corporate strategy of stifling public participation in discussions of corporate malfeasance. Unethical corporations use SLAPP suits to cripple the finances of those who object to their business practices.

SLAPP suits can be controlled and their deployment can be limited in a system of laws that makes defamation, libel, and slander matters for the civil courts. By assessing costs and damages against a party who brings a frivolous and vexatious lawsuit (clear characteristics of SLAPP suits), corporate nuisance suits can be made very expensive, and thus they can be discouraged. In Indonesia those checks and balances do not exist.

In fact, the system is set up in a way that encourages SLAPP suits. The party who wishes to eliminate public participation and silence discussion of its bad acts, negligence, criminality, or incompetence is aided and supported by the courts, which provide free legal services. The courts not only tend to side with the deeper pockets; they also have the power to do more than assign damages or financial liability: they can order the imprisonment of those who try to exercise their right to free speech.

If the court system can be seen as a poker game, in Indonesia not only is the dealer biased and the deck stacked, but the dealer carries a gun and is prepared to use it in the interest of the favoured player.

Freedom of expression has a long way to go in Indonesia.