That the Indonesian justice system would arrest, incarcerate, torture, try, and perhaps sentence and convict elementary school-aged children to as much as five years in prison for a minor breach of airport regulations is an apalling abuse of power. I was astonished at the equanimity with which that story was accepted by the general public and even the press, who barely lifted an eyebrow when reporting this story. 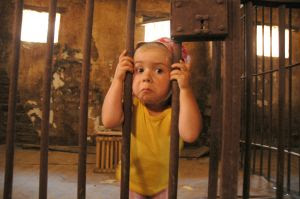 What were they thinking?
Patrick Guntensperger

In Indonesia’s capital, ten children, one as young as 8 years old, are on trial and face five years imprisonment. Their crimes? They illegally offered to shine shoes at the airport and they gambled about 10 cents on a coin tossing game after work.

It’s hard to comment on this appalling story without including a series of sarcastic remarks concerning the courage and tenacity of the police in stamping out this crime spree and returning the country to a state of law-abiding serenity, where no one need fear these dangerous villains. So I won’t. Thank heavens this country is so law abiding that our police have the time to dedicate themselves to investigating and prosecuting such rabid anti social behaviour. The country is once again safe, thanks to their sterling police work.

Okay, now that the outrage has been expressed in facetious terms, perhaps we can speculate on exactly what the guardians of public order were thinking when they arrested these little children, and what on earth was (is) running through the minds of the prosecutors when they pursued these criminal charges.

Surely the police are aware that at Soekarno-Hatta, the kids who offer to shine shoes while you wait for a flight are among the least of the irritants with which one is routinely confronted. Surely, the persistent purveyors of knock off designer watches and pens are more serious criminals, and the aggressively intimidating taxi touts are far more in need of control than eight year old children who offer a simple, legal service for pocket change. For goodness sake, the illegal parking in drop-off zones by drivers who slip the security guards a tip is more of an uncontrolled hazard than rampant shoe shining.

And the gambling. These desperately poor children, who were providing additional support for their families with the change they brought home, indulged in betting the equivalent of 10 cents on coin tossing games. Hardly stock market speculation, and far less likely to lead to the collapse of the world economy.

But swoop down upon them, our protectors did. The children were hauled off to jail, subjected to torture by being forced to lie on the pavement, exposed to the midday sun for hours, and kept imprisoned during their elementary school national exams, undermining any chance they might have of improving their lives through education. Their families were forced, according to one mother, to sell everything from the family stoves, beds, and even clothing to afford to visit their children in prison.

Now the children await trial to determine whether they will spend the next five years in prison. According to Corruption Watch Indonesia, that’s more than the average sentence handed down by the Corruption Court to the country’s greatest financial criminals; people who have stolen billions of dollars from their fellow Indonesians. It is also more time than Soeharto’s son Tommy, spent in jail for the contract murder of a Supreme Court Justice.
Are the police and the prosecutors simply demonstrating their contempt for the poor, the marginalised, the disenfranchised? One thing is abundantly clear; this crackdown had nothing whatever to do with “cleaning up crime” at the airport, as the authorities have claimed.

It is a virtual certainty that not a single air traveller ever expressed dissatisfaction with our nation’s flagship transportation portal because shoeshine boys were betting dimes on coin tosses at the nearby bus terminal. It is not even very likely that there were many – if any – complaints about these children who, in my experience at least, were polite, hardworking, and honest.

On the other hand, there unquestionably have been complaints about the pushy taxi drivers who refuse engage their meters and the vendors of stolen or pirated merchandise. I know this for a fact, because I have written about them and these illegal operators are frequently complained about in print by visitors to Jakarta.

Even the no smoking laws are routinely disregarded, notably by airport security personnel and the police themselves.

Forget, therefore, the possibility that the police and security people suddenly underwent a sea-change, and decided that all regulations would henceforth be enforced to the strict letter of the law. Virtually no other regulations are enforced consistently or even regularly.

It couldn’t be because the police, in an attempt to revamp their image and the broadly held perception that they are among the most corrupt and distrusted institutions in Indonesia, launched the sweep as a public relations move. They have to be aware that this persecution has tarnished their image even further, making them look like jackbooted thugs. They can’t be so blind as not to see that this has enhanced their image as cowardly profiteers who turn a blind eye to genuine crime when sufficiently well bribed, and instead persecute harmless children.

Are they that blind and insensitive? That doesn’t seem likely. It doesn’t even seem possible. It is far more likely that they are simply that indifferent. The people in the system are apparently so taken with their own power that they couldn’t care less what you think, or what anybody thinks. In fact, almost as much as it is a brutal and capricious abuse of the power they wield, this persecution is a clear gesture of contempt for the people of Indonesia.

If that’s not what was going on in the minds of those who are pursuing this travesty, I have to ask again: just what on earth were they thinking?