As the 2009 Indonesian presidential elections were getting closer, I worked with Shawn Crispin, the Southeast Asia editor of Asia Times (Online) to put together a piece on the role corruption played in the campaign. The result was an analysis that was published at atimes.com on July 1, 2009

Below is another piece on that issue that I wrote at the same time on much the same subject. 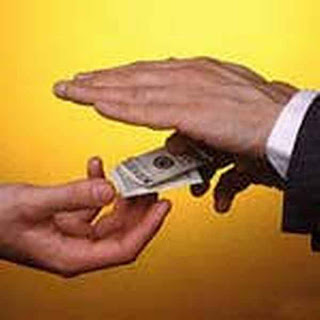 On the morning of the June 18th Indonesian presidential candidates’ debate, the headlines in Indonesian newspapers announced that former Bank of Indonesia deputy governor Aulia Pohan was convicted and sentenced to 4 ½ years imprisonment on embezzlement charges. Pohan is the father in-law of incumbent President (SBY) Susilo Bambang Yudhoyono’s son.

Indonesia’s current president, and candidate in the election slated for July was first swept into power on the strongest democratic mandate of any head of state in recent memory. His powerful victory in Indonesia’s first direct election of a president has been widely attributed to his campaign’s anti-corruption stance, not an insignificant posture to assume when confronting the electorate of one of the most corrupt countries on earth.

Not surprisingly, the topic of corruption is once again a major election issue. To be sure, it is a subject dwelt upon more consistently by SBY himself, who has notched an impressive tally of big wins in his drive, than the other candidates; nevertheless for any candidate to avoid discussion of the subject would be to ignore the elephant in the living room.

Early in his five year-term, SBY stick handled the institution of the Corruption Eradication Commission (KPK), a new investigative body, largely autonomous, which, in principle, reports directly to the president. The KPK is tasked with investigating major cases of corruption and will normally only look into cases that have resulted in losses to the state in excess of Rp. 1 billion It was critical that the KPK remain squeaky clean, and thoroughly professional; as an institution, they have not let anyone down in this respect.

So concerned about their image are the members of the KPK, that when invited to address a luncheon hosted by the Jakarta Foreign Correspondents Club last month, they declined and counter-offered a lunch hosted by the Commission at their headquarters, lest the five star luncheon be seen as a gratuity.

From the outset, the KPK did a sterling job of nailing some bigger fish. They targeted mid and high-level corrupt officials and successfully prosecuted bureaucrats and elected representatives previously considered to be, for all intents and purposes, above the law.

Cynics would say, of course, that the rate of corruption is so high in Indonesia, that if you were to spit out any office window in Jakarta, you would get at least one indictable official wet. That there is some truth to this suggestion is borne out by the numbers. By 2008, 16,200 cases had been reported to the KPK; in 2007, due to limited resources, only 17 were investigated and fewer were expected in 2008.

Nevertheless, the KPK has been doing some deadly accurate expectorating. Their investigations were so thorough and professionally conducted that they maintain a 100% conviction rate in the Corruption Court.

The strongest criticism of the KPK’s carrying out of its mission to catch and fry “big fish”, although rarely heard domestically, is that it neglected to go after the biggest one of them all; former dictator Suharto. Even now that he has gone on to meet his reward, his family enjoys freedom to enjoy the vast wealth stolen from the people by the man historians describe as the most corrupt head of state in modern history. Nevertheless, the KPK has not shown any enthusiasm for taking on Suharto’s legacy or his progeny.

Given the influence that the Suharto clan and loyalists still exert in Indonesia, any focused attempt to repatriate the billions of dollars they still control would likely be quixotic at best. Not only would such an investigation probably result in failure, it would divert the KPK from going after softer but more winnable targets. Somebody has clearly decided that a 100% conviction rate is worth protecting, whether as a matter of pride or as a deterrent to further corruption; whether the decision to address only sure things was made by the KPK or the president is moot.

As an institution, there is little with which to find fault in the KPK; the human beings who constitute the Commission, on the other hand, are fair game. This year, as the elections were approaching, KPK chairman Azhar Antassari found himself caught up in a staggeringly sordid scandal involving murder, adultery, secret lives, and female golf caddies. Antassari was been named a suspect (roughly equivalent to being indicted) for allegedly having arranged the drive-by shooting death of a rival for the affections of a young golf caddy who may or may not have been the second wife of the victim. How the melodrama will play out is anybody’s guess, although Antassari is firm in maintaining his absolute innocence of all charges and allegations.

When Antassari stepped down to enter detention, the KPK formed a committee of five deputies who would act as rotating chair of the Commission. This crack in the edifice seemed an ideal opportunity for the soon-to-be-departing members of the DPR.

Since the national legislative elections were just around the corner, many of the honorable members would be losing their perks and privileges and therefore needed some freedom to ratchet up their efforts to secure comfortable retirements. Accordingly, the DPR demanded that the KPK be shut down and all activities cease until the disposition of the Antassari case. Their justification was that the charter of the KPK required that the Commission have a chairman and says nothing about a committee sharing the duties.

The demand seemed to die a death of attrition as the howls of derisive laughter echoed around the shameless attempt by the mice to send the cat on vacation. The proposal that the KPK be shut down revived theories that the entire Antassari affair was a setup intended to hamstring the KPK, or at least to tarnish its image as Indonesia’s Untouchables.

Meanwhile, the work of the KPK proceeds.

SBY has a clear advantage in the struggle for the ethical high ground. On the morning of the July 18th presidential candidates’ debate, the headlines in Indonesian newspapers announced the conviction and sentencing to 4 and a half years imprisonment on embezzlement charges, former Bank of Indonesia deputy governor Aulia Pohan. Pohan is the father in-law of SBY’s son. Deeper in the papers one could find reports on the charges laid against former DPR Commission V member Abdul Hadi Djamal with graft associated with the granting of infrastructure contracts. The former legislator faces a possible 20 years imprisonment if convicted.

Even those who routinely lament the snail’s pace progress of SBY’s clean-up program have to acknowledge that before his mandate, such cases, let alone such convictions, would have been unthinkable.

SBY consistently returns to his bureaucratic reform mantra – a clear euphemism for graft-busting – on the hustings and in debates, putting his opponents in the race for the palace in an awkward position. Kalla can hardly criticize even the slow pace of reform, as he was noticeably absent from the field of play when the highest profile anti-corruption measures were being deployed. Megawati is obliged to steer clear of the subject as much as possible, as it was under her watch that corruption, initially instituted by Suharto, became as systemic and firmly entrenched as it was when SBY rode in on a wave of anti-corruption sentiment.

The upshot is that bureaucratic reform, clean government, corruption eradication, and all the variations on the theme, have become the central issues in the elections. While this is a good thing, there has been little of substance added to the recipe. Beyond the promises to continue the forward movement and to stay the course, there have been no assurances of the creation of additional initiatives, or even of increasing the meager budget of the wildly successful KPK.

Also on the negative side of the ledger is the fact that education, foreign policy, human rights, religious freedom and dozens of other pressing problems in Indonesia have received scant attention from the candidates.

But even that neglect of other pressing issues plays to SBYs strengths; he has frequently pointed out that at the root of every problem facing the country, from environmental degradation to Jakarta’s endemic traffic problems, one can find corruption impeding reform. Solve the corruption problem, and virtually every other problem facing the country will be easier to address. Of the three candidates in this election, only SBY has the credentials, the history, or, apparently, the political will to take even the most elementary steps to address Indonesia’s culture of corruption in any systematic way.