I wrote this one a few months back when I was considering the quality of life in one of the world’s biggest cities. I commented that most of the complaints we voice about the way we live are really complaints about rudenes, self-centred behaviour and the absence of consideration for others. A little consideration for others (which is, after all, the foundation of all laws and societies) exercised by the people of any metropolis would go a very long way to improving the overall quality of life. 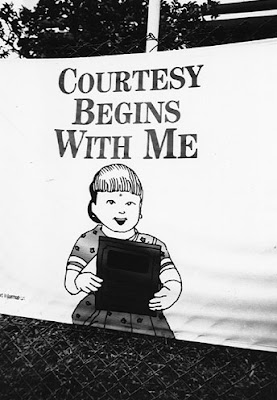 
According to the great Elizabethan era political philosopher Thomas Hobbes, man first began to acquire a veneer of civilization when he looked outward from himself and began to acknowledge the rights of others. Man became civilized, Hobbes postulated, when he first made covenants, when he voluntarily gave up a degree of personal freedom in exchange for a harmonious existence with the rest of his species. Hobbes described human existence prior to the establishment of such covenants in one of history’s most trenchant phrases: “The life of man, solitary, poor, nasty, brutish and short.”

Customs, social mores, rules of behavior and, eventually, laws all grew out of man’s recognition that Hobbes’s “State of Nature” was out there waiting for us to disregard our covenants. Most people recognize that solitary, poor, nasty, brutish and short existences are in store for us if we forget that adhering to commitments and submitting to the rule of law are a necessary part of life on a planet inhabited by people besides ourselves.

Of course there will always be those who place themselves above the laws or choose to disregard rules of common decency; that’s why there are legal and social sanctions for those who break their covenants with the rest of society. But if a society establishes laws and regulations only to have them generally and customarily ignored, that society is dangerously close to a collapse into chaos. A society that follows no laws is, by definition, in a state of anarchy.

The surest way to guarantee that laws are generally ignored is to have many laws, absurd laws, unreasonable laws, contradictory laws, indecipherable laws, laws open to wide interpretation and then fail to enforce them or only enforce them selectively.

When asked about the absurd, unreasonable, contradictory and indecipherable recently passed law on pornography and its likely interpretations, Andi Mallarangeng, the presidential spokesman was sanguine. He laughed it off, pointing out that the president had recently attended a function at which dancers performed in their ethnic costumes, costumes which clearly violated the letter of the law. Nobody was charged under the new law. Clearly, he observed, the law would neither be enforced nor complied with, so why worry about it?

Well, we who live in Indonesia should worry about it for a number of reasons. For one thing, Andi was wrong. Later the same week that the presidential spokesman had reassured the foreign press corps that things cultural would never be interfered with, Ahmad Heryawan, the governor of West Java Province, put a stop to traditional jaipong dances, using that very law as a justification, because he found the performances “provocative.”

So, while the laws may not be complied with, they will certainly be at least selectively enforced. This reduces even the abysmally low level of respect with which laws are held here in Indonesia. That, too, is something to worry about.

That laws in Indonesia are considered to be more guidelines, really, than actual laws is evident to anyone who has survived the experience of driving in Jakarta traffic. I had a guest from Canada recently remark on the third day of her visit that she had just realized that one is supposed to drive on the left in this country; until then she had thought that one simply looked for empty space ahead and stepped on the gas. That first impression was probably more accurate.

Immediately apparent to any visitor and symptomatic of the customary disregard for rule of law in Indonesia’s capital are the freelance traffic wardens. Traffic is directed by street thugs who make their living off the donations voluntarily handed to them by motorists. The most lucrative intersections are occupied by the toughest or best connected and considered to be their turf.

Interestingly, most motorists only give a handout when they have benefited from an unfair advantage. Traffic is blocked so that an illegal turn can be made; coins are proffered. The result, of course, is that traffic is usually far more chaotic at intersections handled by these thugs.

But the disregard for society’s laws is seen all the way to the top. The papers are full of stories about abuse of power, about rent-seeking at every level of bureaucracy, of vast amounts of money siphoned from the public purse to private bank accounts. Everyone, it seems, considers himself an exception to the rules that govern our society.

In a country of nearly a quarter of a billion people, less than 10 percent of that number are registered taxpayers and three quarter of those are corporations, most of which are transnational. The average member of this society demands much of the rest of society, expects little, gets less and gives even less than that.

For this or any other society to work, it is necessary that there exists an ingrained sense of reciprocity. If we are going to expect fair treatment, we must be prepared to dispense the same. If we are going to demand government services, we have to be willing to contribute.

If we want a cleaner, healthier city, we have to refrain from throwing our refuse on the street. If we want less chaotic traffic conditions, we need to practice courtesy in our driving habits. If we want a more law-abiding society, we might actually obey some laws and actively oppose the truly stupid bills when proposed.

In short, if we want to have the civilized society that other nations have achieved, we would do well to make covenants. And live by them.