I wrote this as an op-ed immediately after having watched the presidential candidates debate. They were so lackluster and platitude-ridden, I was anxious to see someone – anyone – grab something as an issue and run with it. 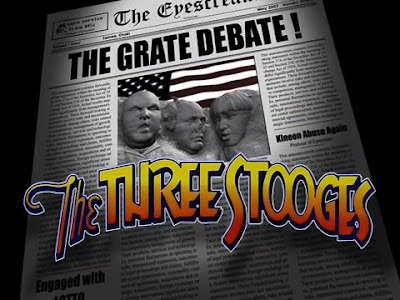 The fact that Indonesia is so fraught with problems should actually be seen as a tremendous opportunity for non-incumbent presidential hopefuls. As the July elections approach, we could be forgiven for wondering why, thus far, the Kalla-Wiranto and Megawati-Prabowo teams have neglected to capitalise on the higher profile and very fixable difficulties with which the country is faced.

The SBY-Boediono pairing has both the benefit of playing on the home-field and of holding the tactical high-ground. To underscore their advantages, daily newspaper headlines seem to play serendipitously to their strengths.

The home-field advantage – the incumbency – allows the president and, by extension, his running mate to benefit from good news, and to distance themselves from the bad. Good news is always good for the incumbent – what ever happens during the campaign period happens on his watch. As far as bad news is concerned, the pressures of the campaign can always serve as mitigation for anything that goes awry. Moreover, their opponents have to be very careful when bad news crops up; they can’t afford to be seen as capitalising on the suffering of Indonesians.

The tactical high-ground doesn’t always belong to the incumbent – just imagine if George W Bush had been in a position to run again in 2008 – but SBY-Boediono clearly hold it in this election. Every day we see more high-level corruption cases successfully concluded, with ex-governors, even relatives of the president himself being sentenced to years in jail. What more could a president who vowed to combat corruption ask, just a few weeks before the election, than to see his son’s father in-law convicted and sentenced to four and a half years for conspiring to embezzle state funds? He couldn’t have scripted it better.

On the economics front, the picture is every bit as rosy for the pair. Amid a global economic meltdown that has crippled the economies of the world’s most envied countries, Indonesia remains buoyant. Largely insulated from the crisis, Indonesia’s economy shows growth that would be enviable even in good economic times, while even the mighty Singaporean economy posts negative growth figures. All this even has the courtesy to occur at a time when SBY is running for re-election paired with a running-mate respected for his economic skills.

All of which brings us back to the question posed earlier. Why are the challengers playing to the incumbents’ strengths? It’s clearly a strategic error for either of them to allow the campaign to be about the war on corruption or the economy. That’s where the wide array of other problems facing Indonesia could be a potential goldmine for pretenders to the throne.

An entire presidential campaign, for example, could be run on the difficulties with transportation and related services in Indonesia. Civilian airliners and military helicopters seem to drop from the sky like hailstones. No Indonesian carrier is even allowed in European airspace, an injunction that was reinforced, not lifted, by the most recent European decision. Inter-island people ferry services, in an archipelagic nation of some 17000 islands, employs obsolescent equipment, the accommodations are indescribably filthy, the ships are grotesquely unsafe, and the service is riddled with inefficiency. Can we even imagine the interest that would be sparked if some real attention was focused on improving the country’s transportation infrastructure? Developing urban mass transit? Relieving the mind-boggling traffic in virtually every urban center?

How about education? Although one of the presidential debates had that as a theme, the lack of interest in the subject on the part of the candidates was palpable. Even though SBY, through some accounting sleight of hand that didn’t really expend more money, for the first time met the constitutional requirement of allocating 20% of the national budget to education, the standards remain appallingly low, and every Indonesian who can afford to do so sends his children abroad for advanced learning.

There are always environmental issues. We’re just coming into the season in which rice field stubble fires on Sumatra and elsewhere provide neighbouring countries with an eye-stinging haze that can be seen from outer space. Illegal logging proceeds uninterrupted at a pace that will see some of the last virgin rainforests reduced to a moonscape in our lifetime. The rivers and canals in the cities, waterways that could serve as transportation and recreation alternatives, are choked with so much rubbish that they cause massive flooding in the rainy season and are toxic reservoirs that emit a stench that would cause Zeus to wag his head in disbelief.

How about reforming the AGO’s office? Rehabilitating the Supreme Court? The police? Let’s not even get started on the KPU.

Candidates, the field is ripe and verdant. There is so much that can be addressed to score political points. Stop dwelling on the areas where there has been improvement; those are SBY’s.

Remember, every silver lining has a cloud and the glass is half empty.