The Indonesian presidential elections are approaching amd despite it having been more than a decade since the dictator Soeharto was forced out of power, the country still reflects the personal stamp he put on it. This is still Soeharto’s Indonesia. And the choices at the polls this year reflect that. 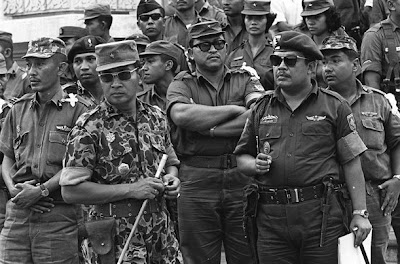 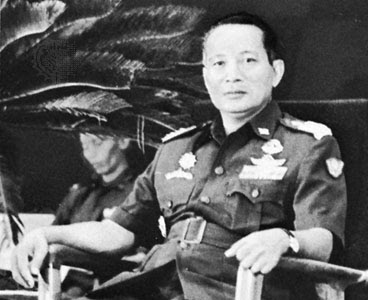 Marching boldly forward into the past
Patrick Guntensperger

If there was any doubt that Indonesian politics is still mired in the politics of the New Order, one only has to look at the current manoeuvrings in which Soeharto’s old political machine is engaged.

As current Golkar chairman (and only incidentally, Indonesian vice-President,) Jusuf Kalla chases his own hat into the ring, followed by his running mate (and incidentally, Soeharto’s last appointed chief of the military), ex-general Wiranto, Golkar holds meetings to decide when to select a new chairman. Conditioned by decades of uncontested rule, Golkar still proceeds as though the country’s leadership is theirs by divine right. Since, as things currently stand, there is no reasonable chance for the Kalla/Wiranto ticket to grab the brass ring, Golkar is working behind the scenes to oust Kalla and consolidate whatever power – official or unofficial – it can.

Some factions within Golkar are jockeying for an immediate convention. This would have the advantage of ousting Kalla right away and elevating a new favourite son to a position from which he could start to create that all-important relationship with SBY and the Democrats, thus ensuring that Golkar places a few key ministers in the cabinet and has a grand vizier or two whispering in the president’s ear.

Of course, that didn’t really work the last time, what with the Vice-president and Golkar Chairman himself becoming a loose cannon rolling around on the decks of the ship of state and requiring periodic denials from the palace that there was any friction between the president and his right hand Golkar representative. On the other hand, with an appointee, that might just be different. Just ask Aburizal Bakrie.

Bakrie, who largely financed SBY’s wildly successful presidential campaign last time around, was well rewarded for his contributions. He was initially given the plum position of Coordinating Minister of the Economy. Although he proved to be utterly inept at the job, the president was still so grateful for the financial support of the Golkar advisor, that he kicked out Alwi Shihab, arguably the best Coordinating Minister for the People’s Welfare imaginable, to make room for Bakrie.

Since Bakrie’s performance in the welfare leadership portfolio has been something of a joke (a black joke if you ask any of the uncompensated victims of the Sidoarjo mudflow), and since SBY’s campaign isn’t in such need of Bakrie’s financial support this time, that cabinet post will almost certainly go to someone more suitable. Maybe even with some actual concern over the people’s welfare. (Note to SBY: Alwi Shihab is still around.)

Naturally, then, in the likely absence of a senior cabinet position, Bakrie is considered the front-runner for the position of Golkar chairman. That carries with it the responsibility of Golkar vote-delivery in the DPR for presidential initiatives, a key issue for any president who wants to see legislation enacted.

But then anyone who can convince SBY of his capability of commanding the votes of the Golkar faction within the DPR would make a suitable chairman.

One-time Golkar leader and former Speaker of the House Akbar Tandjung, therefore is another reasonable candidate. He has considerable sway within the party and countless connections among the legislators. Although he lost his Golkar chair to Kalla in 2004, he still commands great respect among the foot soldiers. The fact that during SBY’s mandate his widely-questioned acquittal on charges of massive corruption sparked riots across the country is in the past, and will probably have no effect whatsoever on the party’s consideration of selecting him as the next anointed one.

The other likely candidate is Golkar’s current vice-chairman and head of the DPR, Agung Laksono. He certainly has all the right connections; he leads a strong support network within Golkar, and is tight with the business community. He has heir apparent written all over him. As long as SBY, and presumably, Boediono, can be convinced that Agung is capable of corralling the fractious Golkar DPR members and delivering a sizeable portion of that voting block, there is every chance that he’ll get the nod.

On the negative side of the ledger is the fact that the collapse of Agung’s company, Adam Air, largely because of its appalling safety record, is still fresh in everyone’s mind, particularly when they must choose a non-Indonesian airline to enter European airspace. But, party politics being what it is, realistically, that will not likely come into play.

One way or another, the next Indonesian presidential elections will require a vote from the electorate for a ticket that includes one or another New Order retired general. Outside of the election booth, where it’s fair to say the real power plays are carried out, the same old guard is in the process of shuffling the deck, but the face cards are all too familiar.

Around and around she goes….where she stops, everybody knows.