It’s Sunday tomorrow, so I thought I’d throw this out there. Feel free to weigh in.

5) The statement or implication that ATHEISM is another form of religion.
This frequently heard criticism from theists is a veritable Petrie dish of logical fallacies.

In the first place, it is a misunderstanding, or at least a misstating, of the definition of the word. An ATHEIST is one who doesn’t accept that there is a god. Full stop. There is no positive assertion, no doctrine, no ritual, no scripture. In short, ATHEISM and religion have nothing whatsoever in common.

In the second place, the statement or implication by theists is part of their time-honoured attempt to place rational views on the same conceptual level as their belief in imaginary friends. Another, similar, shopworn attempt is to describe creationism or its new incarnation, “intelligent design”, as theories on the same level as scientific theories. They are not.

I forget who said it, but it bears repeating: Atheism is a religion like not collecting stamps is a hobby.

4) The assumption that theists have a monopoly on morality.

That one is just palpably not true. There simply are no data whatsoever that demonstrate a positive correlation between actions that are inarguably considered moral and the religious views of the moral agents. There are however some less than completely convincing studies that indicate a negative correlation.

Is it really necessary to point out that most of the violence in world history has been done in the name of religion? That true believers are the most inventive and creative artists when it comes to devising ways to cause suffering to other human beings?

3) The classification of ATHEISTS as hardliners and AGNOSTICS as thoughtful and reasonable.

In fact the atheist position is reasonable; keeping an open mind, as agnostics claim to do, is unreasonable. There is not a shred of genuine evidence for the existence of god. There is a nearly infinite supply of counterevidence.

To state that one does not believe in something for which there is no evidence and when reason suggests that the proposition is absurd, is reasonable. To be confronted with an inherently absurd proposition and then to keep an open mind is unreasonable.

In any case, if ANY atheist were presented with incontrovertible evidence of the existence of god, that atheist would rethink the original position. The reverse cannot be said about theists. Since the position of atheism is only a rejection of inadequate evidence, there is always room for adjustment of one’s inability to believe in the absurd in the face of genuine evidence.

Open mindedness is not always reasonable. If you were to say that you keep an open mind on the question of whether Albert Einstein was really an evil mutant alien robot dwarf in disguise as a Princeton professor, bent on destroying peace on planet earth; that would be unreasonable. It is the logical fallacy of “the middle ground”.

2) That religion is a critical component of human nature or character.

Religion is neither critical nor is it even universal in human nature. The very fact that this discussion is occurring is ample evidence of that. Religion started as primitive attempts to account for the inexplicable. The attempt to find rational explanations for the mysterious may well be a crucial component of human nature. But to deny the answers when they are discovered and instead to adhere to the logically preposterous is only characteristic of the feeble mind.

Top thing that pisses (at least) THIS atheist off:

1) That religion is less of a personal belief system and more of a mechanism of social control.

If one chooses to believe in an imaginary being who guides his every move, or Sasquatch, or the Easter Bunny, or the Flying Spaghetti Monster; that’s a personal decision. To impose such fatuous doctrines on the rational, to include these beliefs as part of the fundamental framework for governance of countries, to legislate according to the fantasies and hallucinations of psychotics interpreted as god’s voice is simply not rational and is a denial of human rights. 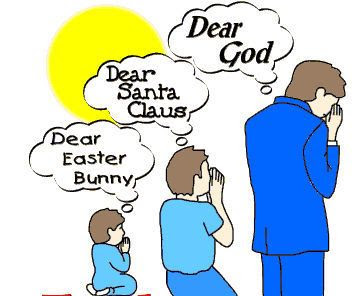 I welcome any rational contribution to this starting point for a discussion.