This was written not too long ago and it serves to balance my usual kvetching about things political.
Ambon
Patrick Guntensperger 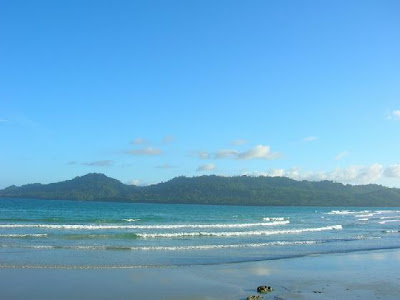 It’s the middle of Ramadan and I’m flying to Ambon from Jakarta. My wife’s grandmother is sick and neither my wife nor I have taken a vacation for some time, so we decided to visit family and take a few days of R & R at the beach. Although my wife was born there and lived there until her early teens when she moved to Manado on North Sulawesi Island, I have never visited the city before.

I know that Ambon is the capital of the Malukus, which were once known as the Spice Islands and ground zero for the British – Dutch Spice Wars of the 17th Century; I know that the city was once a centre of Christian – Islamic violence and that conditions there continue to be somewhat tense; I know that since the military and the police were officially separated, the two formerly conjoined twins frequently resort to bombing and shooting one another along with innocent bystanders to express their sense of professional rivalry; I know that Manado has a sizeable population of Christian refugees (some of my wife’s family among them) from religious persecution in Ambon.

Not exactly vacation brochure copy. On the other hand, I also know that Ambon and the surrounding area and out-islands are legendary for their beauty, the climate, and the pristine waters surrounding the thousands of coral atolls that make up the sub-archipelago of Maluku Province.

The vicissitudes of domestic air travel in Indonesia require that we take one of the dozens of budget carriers that seem to shed aircraft from Indonesian skies like hailstones. And just to make things even more fun, although we can arrange a direct return flight, all that is available on the outward journey is an overnight milk run with stops in Surabaya for an hour and another in Makassar for two.

The sun is coming up over the Malukus as we approach from the southwest and I’m stunned by the beauty. Every South Sea Island cliché comes to mind…there are uninhabited postcard coral islands dotting the crystal turquoise waters, conjuring fantasies of a sarong-clad Dorothy Lamour, and a hundred romantic adventure books. As we start our approach, we are low enough to spot shoals of fish and a pod of dolphins herding them like outriding cowboys.

The airport terminal is a pleasant surprise; clean, free of broken or superannuated equipment, and as efficient as one could hope for; luggage found and claimed within ten minutes of disembarkation. Heading for the exit doors, reality intrudes again; two plainclothes officials need to see me, apparently the only westerner on any flight that day, in their office. A scrutiny of the passport, much deliberation, a good deal of tut-tutting. All of the above are the accepted signal that it’s up to me to offer some cash as a gesture of respect at this point; just to be bloody-minded, I smile and pretend that I don’t understand a word of Bahasa Indonesia. Astonishingly, they just give up, tell me in gestures and a word or two that I must report to the local constabulary, and return my passport.

The startlingly scenic road from the airport around Ambon Bay to the city is another surprise; unfractured, in good repair, and devoid of the rubbish piles on the shoulders that characterise other Indonesian public thoroughfares. As we cross small estuaries, we can see village women washing clothes and spreading them on rocks to dry in the sun; there isn’t even the gagging stench of pollution that long-time Jakarta residents identify with all natural freshwater sources. The overwhelming odour is that of cloves; the harvested spice is drying woven rattan mats along the side of the road, providing a heady, exotic atmosphere…I will probably always associate the aroma of cloves with this place.