I wrote this a few years back and decided to run it again now as Kalla is running for the presidency of Indonesia. In my view he was a ridiculous vice-president and I believe he would be a disastrous president.

This article serves as a reminder of the feelings he inspired when there were some restraints on him. The mind boggles at a Kalla with his hand on the tiller. 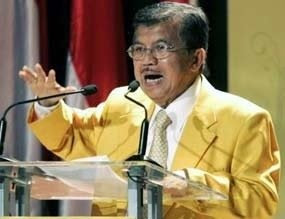 Those of us who follow Indonesian politics are accustomed to vice president Jusuf Kalla’s tendency to blurt out whatever is on his mind. He has made so many outrageous off-the-cuff statements that writers and editors tend to give him a free pass on many of his more contentious quotes. “That’s not what he really meant,” or “There he goes again!” are common reactions among journalists rather than the outrage and indignation with which they would react if any other public figure made similar comments.

But when Kalla repeatedly reiterates the statement, elaborates on it, and develops it as a running theme, perhaps it is time for the remarks to be considered seriously. Kalla may be a loose cannon, occasionally his overstatements may need to be placed within a rhetorical context, and sometimes we just have to accept that he speaks before he has fully thought out his position; nevertheless, when he seems to have developed a genuine, considered opinion, we have to bear in mind that his words ought not routinely be dismissed as he is, after all, the country’s vice-president.

Jusuf Kalla’s state visit to China seems to have given him an opportunity to consider the relative merits of democracy. And in the vice president’s view, democracy seems to have come up short.

Kalla, over the last few weeks has made remarks to the effect that an overabundance of democracy is hampering Indonesia’s progress; that individual rights are interfering with the country’s growth; that democracy tends to make people more selfish and less public-spirited. He has recently stated that “western-style” democracy simply won’t work in an Asian context.

One can glimpse the source of Kalla’s dissatisfaction with democracy, if one chooses to forget for a moment that he is a representative of the people’s interests, and only consider things from the standpoint of a bottom-line oriented businessman. In a business, particularly a family-owned business, if you are the CEO, you issue orders and instructions and expect them to be carried out. You don’t have to go through the tiresome process of explaining your motives, your methods, or even justifying your reasons for starting the projects. You don’t have to put contracts to tender, you can hire and fire at will, and you don’t need to consider the wishes of anyone affected by your decisions.

In a democracy, however, all those things have to be considered. For a hard-driving CEO, those might all be impediments to getting the job done. But our vice president has to bear in mind that his position is not that of a CEO in a family-owned company. And his primary job is not making a profit. His job is to represent the people.

He has said during his Chinese state visit that that his government’s failures to repair irrigation systems, to build infrastructure, or to build anything significant for that matter, were not the result of under funding or anything else. Kalla sees the people of Indonesia as being too self-interested and insufficiently public-spirited to allow for the efficient completion of major projects. He sees this self-interest as being the fault of democracy, or more specifically, “western-style” democracy.

As the vice president of a constitutional democracy, it is inappropriate for Mr. Kalla to denigrate the very system that put him in a position of leadership. It becomes grotesquely inappropriate when he does that in a foreign, non-democratic nation while he is on a state visit. If Mr. Kalla has a suggestion for an alternative constitution, one that enshrines non-“western style” democratic principles as its foundation, surely his repeated comments to the press while representing his own country to another nation are not the way to propose it.

If looked at in the most charitable light possible, Mr. Kalla’s recent remarks reflect a misunderstood set of priorities and a lack of clarity regarding the function of a representative government. While an elected government has the responsibility of delivering on commitments, something the current government has repeatedly failed to do, the government has a higher responsibility of providing good governance. Good governance means delivering on commitments in a transparent, honest, and inclusive way. Efficiency is not necessarily the highest ideal of a people’s government; fairly representing the people, recognizing their sovereignty, and acting in their best interests are higher ideals.

Democracy, western style or Asian, is not inherently efficient. It is not a system established for the completion of projects. It is not a business model nor is it an impediment to the “real” work of government. It is a philosophy of governance that assumes that the people are an end in themselves and not a means to an end.

Nevertheless, if an elected government is unable to deliver on reasonable commitments in a democracy, it ought to look at the capabilities of its leaders to identify the problem; blaming democracy itself is neither reasonable nor fair. Democracy, after all, has delivered remarkable progress in many places in the west as well as in Asia. It is even fair to say that, on the whole, democracy has a much better track record of delivering more sustainable progress than any alternative system.

Moreover, democracy is the system the people of Indonesia have chosen; and in a democracy, the people have the final word.