It is hard to imagine a less likely partnership for making a positive difference in the lives of villagers in Central Kalimantan province on Borneo island. 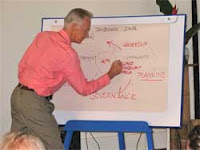 Bardolf Paul, a Canadian expatriate and one-time commercial designer, is quietly working deep in the Kalimantan jungles to improve the lives of the Dayak villagers. The partnership, supported and funded by Kalimantan Gold, a London and Toronto-listed exploration company, is the result of an unexpected synergy between a unique corporate viewpoint and a man with an unusual capacity for living his vision.

Bardolf was born in Canada in 1943 and spent most of his adult life in the corporate world as a designer and graphics specialist. At an age when most people would be making retirement plans, Bardolf left the business world and went back to university, this time to study forestry.
As a Canadian living in British Columbia, an area developed largely as a result of its abundant natural resources, he had always been interested in the social implications of the extraction industries, particularly forestry.

He was predominantly concerned with the ways cultures develop around forests, the ways in which people’s lives are affected by the industrial use of forested land, and the interaction among the various stakeholders, from the extraction license holders to the government departments and, most significantly, to the residents of the region being harvested. Armed with a new degree and an enormous sensitivity both for the earth and for the people who inhabit it, he spent more than a decade working with a series of NGOs in India and Vietnam before coming to Indonesia.

Kalimantan Gold Corporation Limited is an exploration company that is working in the Central and East Kalimantan regions. Breaking from traditional mining and exploration stereotypes, Kalimantan Gold’s corporate culture includes a deep concern about the company’s environmental and social impact on the areas in which it invests.

One of the company’s main concerns — arguably unique among junior mining companies — is that local communities should be one of the prime beneficiaries of any mineral development in the area. This reflects the World Bank’s stance on lack of good governance, which it argues has been the main cause for local people not benefiting from extractive industries like mining.
The foundation Yayasan Tambuhak Sinta was established in 1997 to redress the balance and, with Bardolf Paul at the helm, the company established a close relationship with local people and local government, focusing on conditions for improving governance in local communities and within local government. Underwritten by Kalimantan Gold and led by Bardolf, the foundation has been applying a community development approach that links to the new bottom-up government planning mechanism called musrenbang.

‘The key to what we do is that first of all, we listen,” said Bardolf on a stopover in Jakarta to Canada for his annual leave. ‘We act as facilitators and capacity builders, not as leaders or patrons. The work that gets done, the advances made, and the benefits derived are direct results of the communities themselves. We just help by providing a framework to get the process started and a methodology for ensuring its sustainability”

According to Bardolf, the following principles are key for engaging successfully and sustainably in the development process. First, understand the local context clearly — both government and community; second, involve local people as partners; third, invest in building local capacity, based on local needs and aspirations; and fourth, work with local institutions and existing mechanisms to strengthen the links between community and government.

Bardolf and his team spend much of their time meeting with the Dayak people and facilitating the development of plans to implement their ideas. By helping them create village development plans according to their cultural and traditional ways of life, then facilitating the election of a village management group, Yayasan Tambhak Sinta helps ensure that it is the people’s own vision that is worked toward.

The Yayasan then helps by providing support in all the phases of implementation of the village development plan and providing whatever degree of knowledge and technology transfer is needed to see the plan to fruition.

Along the way, Bardolf makes sure that he is available to act as mentor and go-to person when the village management groups are contracting with local service providers for the labor and expertise to carry out the development plans. At the moment 19 villages are directly involved in the development facilitated by the Yayasan, and the work is expanding to more villages every year.

Yayasan Tambuhak Sinta is a unique NGO. Funded entirely by a mining company for the purpose of giving back to the community and country, it has been working below the publicity radar screen for years. The improvement in the lives of the villagers is palpable and has been supported by a corporation for a decade — before they have even broken ground or extracted a gram of minerals.

Bardolf is an unsung hero, spending most of his time thousands of kilometers from his home and family, working in a decidedly unglamorous and virtually anonymous way to help the villagers of central Kalimantan cope with global expansion into their traditional territory.
At a time when corporate social responsibility has become a legal requirement in Indonesia, resource-based companies could all take leaf from the book of Kalimantan Gold, Yayasan Tambuhak Sinta and Bardolf Paul.

More information on the work being done by Yayasan Tambuhak Sinta can be found at http://www.kalimantan.com/