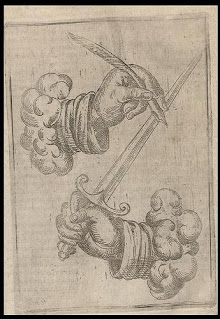 Perhaps this is more manifesto than essay, but it expresses something I genuinely believe. It is written in an Indonesian context, but the sentiments apply everywhere. I hope.

The pen and the sword
Patrick Guntensperger

Those of us in the business of expressing ideas are inclined to preserve our right to do so because of the power they have. Ideas are dangerous. Ideas have the power to change the status quo. It is that intrinsic capability of ideas that lies at the heart of the inclination of people in power, or seeking power, to control their dissemination.

It is up to every one of us to raise hell when any attempt is made to stifle the free expression of ideas. That’s easy to argue for when it is our own idea or an idea with which we agree that is being threatened. It’s opposing ideas and minority opinions that are in the greatest need of our active defence. And that’s the challenge for the average citizen who believes in democracy.

It’s no real test of a person’s democratic leanings when that person objects to the censorship of his own words or of ideas to which he adheres. The question is whether a person feels that opposing views or ideas he finds offensive are as entitled to expression as his own. In Indonesia, more than many other countries, constant vigilance is needed to ensure that freedom of expression – everybody’s – isn’t eroded.

There is a tendency here to focus on appearances; the theory perhaps being that if the appearance is changed, the substance doesn’t really matter. We see this manifested in the proliferation of designer knock-offs, for example. Everyone seems to have Louis Vuitton handbags or wallets or Polo shirts; almost none are authentic. It’s the appearance that counts, not what underlies the labels. That mindset seems to incline members of our government to want to control what people say, believing that by manipulating the words or images published, the underlying ideas will have no importance.

As a consequence, we see the country’s lawmakers from time to time attempting to ingratiate themselves with their parties and with the people by drafting legislation that controls or even silences views and ideas with which they disagree. Such is the nature of those who wield power; moreover it is the nature of the rest of us to permit that abuse of power. The wielders of power, obsessed as they are with superficialities and appearances rather than substance, will never cease thinking up new legislation to control our speech and the expression of our thoughts.

It comes in the form of anti-defamation laws, frivolous slander and libel accusations, religiously disguised censorship, anti-sedition legislation, draconian press restrictions, legal impediments to the acquisition of media licences….the list is endless. What it all comes down to though, is the inclination of those in power to prevent the rest of us from having access to ideas. John Adams expressed it very well: “The jaws of power are always open to devour, and her arm is always stretched out, if possible, to destroy the freedom of thinking, speaking, and writing.”

Those of us in the business of the dissemination of ideas must always have our antennae carefully tuned to detect any threat to our freedom of expression. When our freedom of expression is threatened, we have to recognize that it is not just an assault on our writing, on our art, on our ability to communicate with other human beings; it is an assault on our very thoughts. Control over the expression of our ideas is an attempt to control those ideas themselves.

Indonesia’s is a fledgling democracy; neither the average Indonesian citizen nor the Indonesian politicians are completely at home with the concept and the practice yet. It is therefore appropriate that we be hypersensitive to any attempt to undermine freedom of expression, the most fundamental of all democratic freedoms. When this is done for political reasons, it’s rotten politics; when it’s done for political reasons disguised as religious devotion, it’s unforgivable. We must be aware of the trick of camouflaging attempts at stifling ideas by deploying religious justifications. Politicians are all too aware that the appearance of religious devotion is an invaluable tool for re-election; when religious devotion is used as a bludgeon to silence ideas, it is anti-democratic, and that’s when the watchdogs have to wake up and start barking.

This then, is that wake up call. The instant one becomes aware of an attempt being made to take control of your right to express your thoughts or to hear someone else express theirs, we have to react. And we can never let up. If there is a quote that says it best, it is this one, traditionally attributed to Thomas Jefferson: “The price of freedom is eternal vigilance.”