The Tommy Soeharto case is just the most visible example of the fundamental rot at the core of Indonesian politics. The pampered, arrogant, and somewhat dim favourite son of the country’s former dictator hired a contract murderer to eliminate a Supreme Court Justice. Tommy was convicted and sentenced to five years (an Australian marijuana smuggler got 25) which SBY subsequently commuted. Moreover, even the little time Tommy did was hardly what we would call “hard time”. I, for one, actually saw him with his entourage on a golf course, surrounded by his personal retinue of hookers, friends, and assorted hangers-on, while his “guards” were carrying the golf bags and coolers, and mixing the drinks. He had a small cohort of high-ranking police officers and a few armed rank- and- file soldiers in tow, the function of whom seemed to be to ensure that Tommy wasn’t disturbed by anyone who might want to play through.

I recieved a number of anonymous threats after this was first published. So please address any new death or dismemberment threats to: p.write@gmail.com and add “From a complete asshole” to the subject line for easier filing.

Tommy’s release a failure of political will 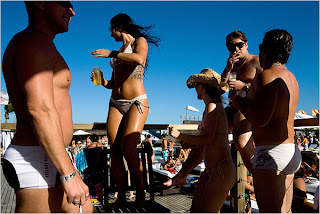 While the rest of the world shakes its head in dismay, bemusement, even disgust, Indonesia greets Tommy Soeharto’s release from prison with scarcely a raised eyebrow. That a son of the man who has been described as the most corrupt national leader of the 20th Century should be freed after only serving four years for the contract murder of a Supreme Court judge doesn’t even raise an eyebrow in this country. Business as usual.

While the people of Indonesia cry out for their democratically elected government to do something about entrenched corruption, President Susilo Bambang Yudhoyono cogitates. Occasionally he makes a pretty speech about Indonesia’s progress, or calls for reform of this department or that division of his government, but the fundamental rot that he swore to eliminate thrives.

Despite having been swept to power as a man committed to reversing years of abuse of power, President Yudhoyono has failed to live up to his promise, and he continues to refuse to take the most obvious steps to honoring his pledge to the people of Indonesia.

SBY, as he is affectionately known by a country that placed its future in his hands, was given the strongest mandate of any democratic leader in recent history. His mandate was to launch a war on corruption; for the new president, there would be no more business as usual.

And yet Yudhoyono refuses to press for the prosecution of former dictator Soeharto; in fact, this president pays his predecessor respects when the former dictator is having one of his periodic convenient health crises. Yudhoyono continues to refuse to step in and require the release of the results of the investigation into the murder of civil rights activist Munir; a murder that every thinking person recognizes as being conceived and carried out by the same entrenched corrupt powers that Yudhoyono was elected to root out.

And Soeharto’s youngest and favorite son, Tommy, who had a Supreme Court Judge murdered to protect himself and his business interests, walks out of prison a free man, having been released from his cushy berth and privileged treatment for what is described as good behavior.

And nobody is really surprised.

Nobody is really surprised because the truth is that Yudhoyono was not elected in a landslide because he was everyone’s ideal candidate; he was elected because the alternatives were so odious.

It is significant that Yudhoyono was, after all, a soldier highly loyal to Soeharto for many years; he had been on the cabinets and in the inner circles of both Presidents Abdurrahman “Gus Dur” Wahid and Megawati Soekarnoputri; he was under the direct command of Gen. Wiranto at the very time the war crimes for which Wiranto was indicted were committed. Yudhoyono, however, always managed to avoid being tainted by the ineptitude or iniquity of those with whom he was closely associated.

In the early part of the campaign, there was a dearth of candidates who had both suitable credentials and relatively clean histories; when Yudhoyono appeared on the scene with both, and voicing a commitment to reform, the people of Indonesia immediately took him into their hearts. His promises found willing ears because nobody with any credibility was saying the same things.

No longer is he simply the alternative whose greatest asset is that he’s not one of his opponents.

It has taken two years, but Yudhoyono has gradually come into focus. He has demonstrated that he is the kind of politician who can’t distinguish between making a speech on a subject and actually doing something about it. He is the type of politician who says what needs to be said to get elected and to maintain his standing in the polls, but balks at making any hard decisions.

He is a politician who passes off diffidence, hesitancy, and indecisiveness as virtues, by having his spin-doctors portray him as a consensus seeker and as a decision maker who abhors haste. In fact, what he abhors is making decisions.

At this point in history, Yudhoyono only maintains any part his diminishing affection in the hearts of Indonesians for the same reason he was elected: A lack of viable alternatives. At this same point in history, if one were to sum up Yudhoyono’s probable legacy to Indonesia, sadly, it would have to be said that he has actually set back the cause of reform, possibly permanently.

His failure to make any real effort to carry out the reforms he was elected to implement has encouraged a national malaise, a conviction that even the best intentions and most florid speeches are hollow; that rampant corruption is an intrinsic part of Indonesian culture and there is no hope of ever defeating it.